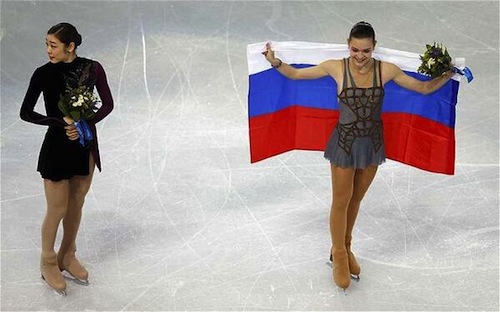 Ashley Wagner ignited an internet firestorm last week when her reaction to her team figure skating score went viral on social media platforms. Now the American is calling for an overhaul in the sport’s judging after Russian teenager Adelina Sotnikova stunned 2010 champion Yuna Kim despite a minor error in her routine, leaving many scratching their heads.

Wagner left the ice beaming after her short program performance, but her smiles turned to a look of incredulation as the judges flashed up the score of 63.10 – her lowest score of the season, and lower even than that of Japan’s Mao Asada who fell during her run.

The judging controversy reared its ugly head again as Sotnikova smashed her career best score to win the ladies’ individual competition ahead of South Korean Kim and Italy’s Carolina Kostner.

People need to be held accountable. They need to get rid of anonymous judging. There are many changes that need to come to this sport if we want a fan base

Sotnikova was the only one of the three medallists not to perform a perfect skate as she snatched a landing at the end of one of her golden combinations.

Yet the judges still awarded the Russian a score of 149.95, beating her season’s best by a full 18 points, and ensuring Russia’s first ever gold in the ladies’ event.

And Wagner says that the judging process needs to be evaluated if the sport is to retain any credibility and increase its fan base further.

“People don’t want to watch a sport where you watch people fall down and somehow score above someone who goes clean,” she said.

“It’s confusing and we need to make it clear for people.

“People need to be held accountable. They need to get rid of anonymous judging. There are many changes that need to come to this sport if we want a fan base.”

U.S. Olympian Ashley Wagner did not look pleased about her score in a team event. http://t.co/l3SuZy6itL pic.twitter.com/x08fULXf2r

But Sotnikova played down any controversy following her win, saying that she knew that she’d performed a medal-winning skate.

“I knew I would be on the podium but I didn’t know which medal I would win,” she said.

“When I saw the scores and realized I won in terms of the technical components, really, I didn’t believe my eyes.”

The nine judges for the short and long programs are chosen from a pool of 13, with eight of the judges only working on one event or the other.

Therefore judges from the United States, South Korea, Great Britain and Sweden were all replaced for the long program having been on the panel for the short program the previous night.

Their replacements included Ukrainian Yuri Balkov, who has previously served a year’s ban from judging having been tape-recorded trying to fix the result of the 1998 Nagano ice dancing competition, and Alla Shekhovtseva, a Russian judge who is married to Russian federation general director Valentin Pissev.

Another of the replacements was a French judge, the country who conspired with Russia to try to fix two skating events at Salt Lake City in 2002.

IOC communications director Mark Adams also dismissed any speculation that Sotnikova’s result was in any way shady, stating that no protest had been made.

“I am certain that there hasn’t been any complaint,” he said.

“If there isn’t a credible complaint then we wouldn’t take it any further – but this is all hypothetical.

“I don’t know much about skating but I think Sotnikova’s performance was agreed by many to be absolutely fantastic.

“I know that the IOC has a pretty sophisticated judging system with safeguards in place.

“It is the International Skating Union which chooses the make-up of the [judging] panel and I think it’s clear that there’s no hiding who is on the panel.”