Sochi 2014: US women do country proud in two-man bobsled though former summer Olympian Lolo Jones not so popular 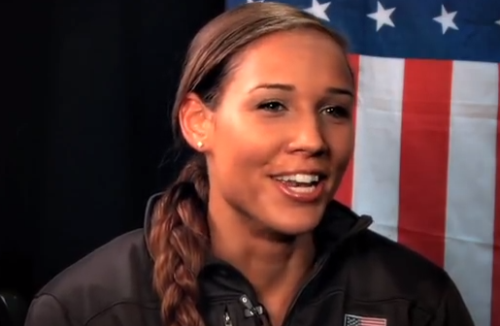 American bobsledder Lolo Jones has been making her share of headlines in her home country since her conversion from 100m hurdles at London 2012 to the two-man bob in Sochi.

The 31-year-old, however, makes the news more for what she hasn’t done rather than what she has.

Despite finishing fourth in the hurdles final at the London Olympics, Jones is still best known for her revelation that she is still a virgin, and will remain one until she finds a suitable husband due to her religious beliefs.

But the coverage of Jones is now coming under scrutiny in the media and in the US Winter Olympic camp, with former US Olympian Chuck Berkeley suggesting that she was only picked for the team as a marketing stunt, not for her bobsleigh ability.

Absolutely no doubt that @KatieEberling would have done better for USA3. Hope the marketing dollars were worth it. #merit #Olympics2014

In the end Jones and her teammate Jazmine Fenlator finished 11th out of the 19 teams after all four runs as Lauryn Williams clinched silver with Elana Meyers in US1 and US2 took bronze, Canada taking gold.

The American media do enjoy following the fortunes of famous sporting virgins, as shown by the adoration and maniacal coverage of failed NFL quarterback Tim Tebow.

Tebow attracted over 200 members of the media to his first press conference with the New York Jets, despite the fact that he was never likely to be a star player on the team.

It’s no surprise then that Jones has stated her desire to take Tebow to church one day, which could be a euphemism, who knows?

And the media cannot claim that it’s Jones’ change of sport that is the subject of their attention.

Williams won medals at the summer Olympics, taking silver in the 100m in 2004 and gold in the 4x100m relay in 2012 before turning her attentions to the ice.

Sochi 2014: Canada day in curling as men and women advance to finals