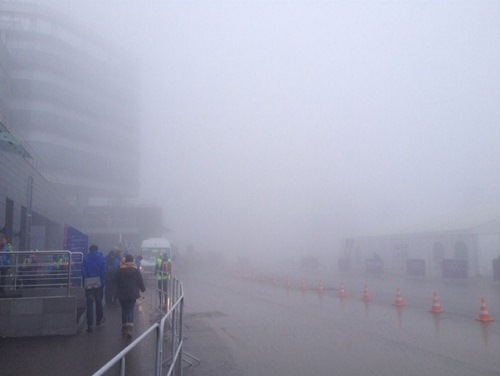 Despite day 10 of the games being marred with postponements as a result of poor weather conditions and vertically zero visibility – it seems spirits in Sochi are still high.

The men’s snowboard cross was the first event to be suspended, before the men’s 15km mass start also fell foul to the fog again – after yesterday’s rescheduling.

Tim Burke of the United States was expecting to race in the men’s biathlon but at least it now seems he will be fully rested up once the fog clears.

Hurry up and wait. The race is again delayed because of fog. Back to bed for me! #Sochi2014

After finishing 13th in the women’s luge, Arianne Jones was faced with further disappointment as the reality of her childhood dream wasn’t quite what she expected.

As a kid I thought it would be cool to live in the clouds. Turns out the view is not so spectacular… #sochi pic.twitter.com/1JSMZ7418g

The Canadian snowboard cross team is keeping busy as they wait for the fog to lift in Sochi http://t.co/YAKt6LniBP pic.twitter.com/Z8qnR5v0dh

However alpine skier, Phil Brown, discovered the most effective way to escape the poor conditions descending on Sochi’s slopes and it made for an incredible sight.

With the postponement of both the men’s snowboard cross and mass start biathlon race, focus will switch to the climax of the two-man bobsleigh with Russian pair Alexander Zubkov and Alexey Vorvoda in the lead at the halfway stage.

Medals are also up for grabs in the men’s aerial freestyle skiing, the team ski jump and figure skating pairs while the women’s ice hockey semi-finals pit the USA against Sweden and Canada take on Switzerland.