Sochi 2014: Openly gay Daniela Iraschko-Stolz flies in the face of Russian coach saying womens' purpose is to do housework 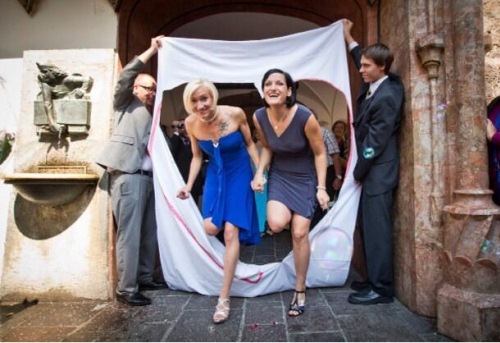 Austrian ski jumper Daniela Iraschko-Stolz hopes that her success on the slopes can inspire women and homosexuals all over the world, after she became the first openly gay athlete to win a medal at the Sochi Games.

The 30-year-old won silver at the inaugural ladies’ ski jump event on Tuesday, fulfilling her promise that she would ‘jump pretty good’ as a political statement to the controversial anti-gay laws introduced by Russian president Vladimir Putin.

Her success also marks a significant landmark in women’s sporting rights as it was the first time in Olympic history that women were allowed to participate in the sport.

I’m married to a woman. It’s a good statement, especially in Russia, to show that people can live together

“I did my best at ski jumping. I’m married to a woman. It’s a good statement, especially in Russia, to show that people can live together,” she said.

“I hope for the future that people can now see sport as a chance to change something.

“When I started ski jumping you were not able to live your life as a ski jumper. Women my age did not have the motivation and quit their careers.

“It’s the most important step for women’s ski jumping to get to the Olympics, because it’s the highest level a sport can reach.”

Men’s ski jumping has been an Olympic sport since the Winter Games’ inception in 1924 but the International Olympic Committee believed there was not sufficient depth of competition or wide enough appeal to justify female participation.

The battle for sporting equality began when ladies’ ski jumping was first petitioned for the Nagano Games in 1998, although it took until 2011 for it to finally be granted Olympic status.

As late as 2005, Gian Franco Kasper, president of the International Ski Federation, announced that the sport “seems not to be appropriate for ladies from a medical point of view”.

Women have another purpose – to have children, to do housework, to create hearth and home

US athlete Lindsey Van, who finished 15th in the inaugural event, has been one of the most vocal activists over the years and she was understandably thrilled to finally fulfil her dream by competing on the elite stage.

“Being here is history,” she said. “I want more people to see that women can ski jump. It’s taken 90 years for us to get here.”

“It’s a pretty difficult sport with a high risk of injury,” he said last month. “If a man gets a serious injury it’s still not fatal, but for women it could end much more seriously.

“Women have another purpose – to have children, to do housework, to create hearth and home.”