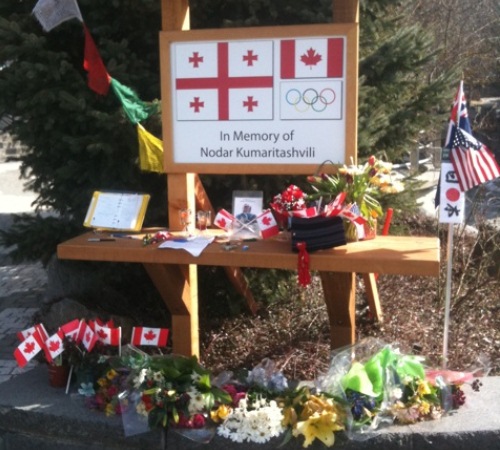 When the men’s luge doubles begins later on Wednesday, February 12 2014, the Olympic Movement will cast its mind back four years to one of the most tragic events in its 118-year history.

On that ill-fated date at the 2010 Vancouver Games, Georgian 21-year-old Nodar Kumaritashvili sadly lost his life after crashing in a training run.

Although there will be no official ceremony to commemorate his loss, the luge world continue to mourn and pay their respects.

What happened in Vancouver was something shocking. I didn’t want to go back down the track

“We will never forget Nodar and his Olympic dream and his family,” said Canadian luger Samuel Edney. “The luge community will always have him on our minds.”

“What happened in Vancouver was something shocking. I didn’t want to go back down the track,” he said.

“But we got over that and showed solidarity with Nodar’s family in our own way.”

Kumaritashvili’s fatal accident in Whistler highlighted the need for drastic safety measures to be implemented in the sport.

It is now compulsory that every Olympic competitor completes 10 crash-free runs on the track before qualifying while each course must grade out with a top speed of 135kph.

While such a tragedy is likely to deter people from the sport, USA’s Christopher Mazdzer, athlete spokesman for the International Luge Federation, insists that the sledding community can endure adversity by uniting together.

“It is a tough thing, we are a close community,” he said. “When a tragedy like that happens in such a small group of athletes it definitely affects us. But I know right know we want to push forward.”

Kumaritashvili was among those respected during the IOC’s minute of silence at the opening session of the Games and a flower display will be organised at the Nodar Memorial in Whistler to commemorate the fourth anniversary of his death.

He is the fourth athlete to have died during Winter Olympics practice after British luger Kazimierz Kay-Skrzypeski, Australian alpine skier Ross Milne (both at Innsbruck 1964) and Swiss speed skier Nicolas Bochatay at Albertville 1992.