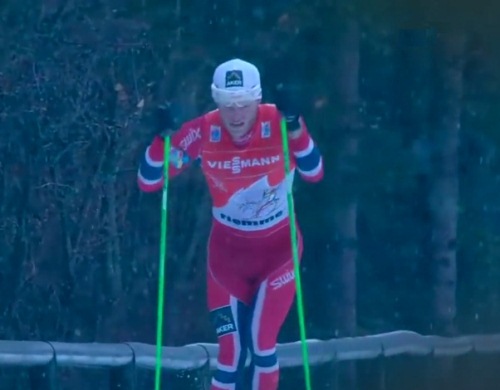 Martin Johnsrud Sundby is likely to be asking for his mother’s day present back after being dubbed the ‘worst Norwegian’ live on television by his own mother.

Gro Johnsrud Langslet made the startling claims after the 29-year-old cross-country skier finished a disappointing 13th in the men’s 15km classic on Friday.

She was seen resting her head despondently in her hands as her son, who leads the overall World Cup, neared the finish stating that he stood no chance.

This is the worst he’s been this year

Langslet said on DBTV: “You’re the worst Norwegian. You should go home.”

These words came after Sundby won his first individual Olympic medal, on the day that Norway celebrated mother’s day, finishing third place in the 30km skiathlon.

However even this achievement proved unsatisfactory for Langslet, as she again delivered a demoralising verdict on his bronze medal.

“He isn’t as bad as this indicates,” she added. “This is the worst he’s been this year.”

Perhaps Sundby can make amends when he competes as part of Norway’s team in the 4x10km relay, who he believes have a very good chance of a medal.

Sundby said: “It might be wrong to say this but I think we have the strongest team and that means we must live up to expectations.”

Let’s just hope his confidence isn’t giving his mother more ammunition to fire his way if he fails to win his first Olympic gold.