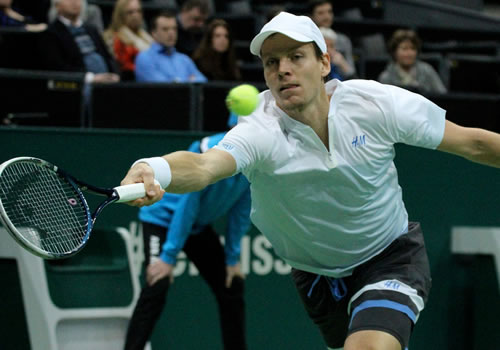 Everything about the quarter-finals of the ABN AMRO tournament in Rotterdam was big.

One of the form players of the last month, Marin Cilic—on a run of 14 successive sets as he raced to the Zagreb title and then through Lukas Rosol and world No10 Jo-Wilfried Tsonga.

And one of the young players tipped for the top, Jerzy Janowicz, who reached the semis at Wimbledon last year to rise to No14 in the rankings, was returning to something like that form that deserted him amid back problems at the end of 2014.

And to make the home crowd happy, there was even a Dutchman in the line-up: The No64-ranked Igor Sijsling beat No7 seed Mikhail Youzhny on his way to the quarters, and as he had a 2-0 winning record over his next opponent, No27 Philipp Kohlschreiber, things were looking very good for his prospects.

But this line-up was big in another very obvious way. Kohlschreiber, at 5ft 10in, looked positively petite alongside his fellow competitors. For what was once considered a good height for a tennis player—around the 6ft 1in, like Rafael Nadal and Roger Federer—has taken a decided upward turn.

Witness Del Potro: a 6ft 6in powerhouse who over the years since he hit Grand Slam heights as a 20-year-old has worked hard on his movement, speed and footwork to great effect

Or look at Berdych: 6ft 5in and a very fluid and balanced mover for his muscular 91kg.

Cilic comes in a more slender package—10kg lighter but one inch taller and very quick on his feet.

Three of the quarter-finalists, Murray, Sijsling and Gulbis, are 6ft 3in—closer to the new norm, it seems, along with Grigor Dimitrov and, an inch shorter, Novak Djokovic and Tsonga.

And the perfect example of the new-model ‘big man’ was Berdych’s opponent, the 6ft 8in Janowicz. He carries his height in a very well-proportioned package—not in the wiry John Isner mould but broad, lean and strong. What’s more, while he certainly has the huge serve that tennis expects from its big men—a league currently topped this season by Cilic with 145 aces, with Del Potro and Janowicz on 90 each—the Pole is more than a one-trick pony. His return of serve is fearsome, as is his forehand, but he deploys drop-shots often and with disguise. In short, he has variety of skill and the power to back it up.

The biggest battle of the big men in the quarters, then, was between the rangy Pole, who had hit Tommy Haas, head shaking in bewilderment, off the court in the second round, and Berdych. And it was clear it would be big battle indeed. They had met twice before, both times last year, and both matches had been won, just, in a deciding set. On each occasion, Janowicz had won the tie-break but Berdych had won the match.

And if Janowicz’s serve is impressive, Berdych’s is arguably the most reliable on the tour. This year, he has won 96 percent of his service games, and thus far in Rotterdam had won 19 out of 19 games on serve, dropping just eight points behind his first serve in both contests.

This would be their closest match yet, a two-and-a-half hour battle in which each fired down 13 aces, each cranked their best deliveries well about 220kph and each thrilled the crowd with their outstanding hitting power—on the run, behind the baseline or coming to the front court.

There was nothing to choose in the first six games until Janowicz began to get a remarkable read on the Berdych serve to return outright winners time and again. He broke in the seventh game, and reinforced the break with an easy hold containing three serves above 222kph.

Not to be outdone, though, Berdych twice returned a 224-serve with a blistering winner and broke back to level at 5-5. A frustrated Janowicz regained his composure to fight off two break points and it headed to a tie-break. The battle was now truly engaged.

Berdych edged ahead 4-1, Janowicz closed to 4-4, but Berdych advanced again to 6-4. Time then for the Pole to crank up his return of serve again, and all Berdych could do was stand with hands on hips in disbelief.

The 28-year-old Czech, stayed impressively calm, drawing on all his mental and physical toughness to ride out the storm, but eventually buckled at 9-9. Two errors, and the tie-break, as in their previous matches, was the Pole’s, 11-9.

But it was that same mental toughness that rode the challenge once they got into the second set, and Berdych readily admitted it is one of his greatest assets.

“It is the part of my game I am most pleased with, my mental game. I started to be much more focused after the first set…

“This is nice about tennis, that even a set like this you can lose, but then afterwards I got my rhythm back. He takes it away from you, how things are going to happen [on court]. It took me a set, but I refocused myself and everything was much better.”

That was an understatement, as Berdych’s will and concentration gradually threw into sharp contrast the lesser mental strength of his opponent. It took five games for Berdych to break, and Janowicz threw his racket towards his chair in frustration. He did not win another game in the 6-2 set, hitting 11 errors to a remarkable two from Berdych.

In the third, the Pole was broken in the third game but, to his credit, he dug deep to stay with Berdych to the bitter end, even resisting break points at 3-5 down. But Berdych was not for turning: He ran out an impressive 6-4 winner.

Berdych looked a strong contender for the Rotterdam title right from the off, and once he saw the next big man in the draw, the top seed and defending champion, Del Potro, felled by a resurgent Ernests Gulbis, the Czech’s case looked even stronger.

In truth, the Latvian who promised so much from the first moment he burst onto the scene as an irascible teenager has, not for the first time, found a wave of form, but this time he seems to be adding consistency to his all-court, power-with-touch brand of tennis.

Gulbis has a hugely watchable style of play and, when hot, can beat almost anybody. He showed that in demolishing Del Potro, just as he had Dimitrov, in straight sets. Asked why the Rotterdam crowd should come to his semi-final against Berdych he was typically to the point: “Because both of us will work our asses off!”

It will be another battle of big men, in every sense of the word.