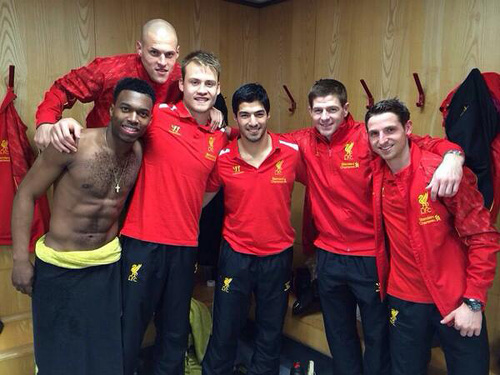 Liverpool moved to within a point of Premier League leaders Chelsea after a nervy 2-1 victory over Sunderland at Anfield.

Steven Gerrard made the breakthrough in the first half thanks to a powerful free-kick before Daniel Sturridge doubled the home side’s lead, with Ki Sung-Yueng netting a late Sunderland strike to ensure a nervy finish.

The Reds go past Manchester City into second place after a tight win, and here is a selection of the best Twitter reaction from the football fraternity in chronological order.

Former Liverpool striker John Aldridge ‏(@Realaldo474) is buoyed by Anfield’s atmosphere: “There is a great buzz about the place!! Atmosphere is great.”

Ex-Sunderland defender Michael Gray ‏(@mickygray33) is not a fan of the Black Cats’s Argentine defender: “Get him off we will do better with 10men… Vergini is the worst player I’ve seen since Fredgard… #safc”

Chris Kamara (‏@chris_kammy) keeps the Twitter world updated: “For those not watching its 1-0 to Liverpool a fab free kick from Steven Gerrard.”

Norwich defender Elliott Bennett ‏(@Ebenno88) eulogises about the Liverpool captain: “When you need someone special to step up Steven Gerrard is always the man for Liverpool. What a football player! Killer blow before half-time.”

Trust a Toffee to take the glean of the striker Lee Carsley (‏@lecarso): “Keeper..”

Former Leicester midfielder Robbie Savage ‏(@RobbieSavage8) also questions Vito Mannone: “@Pschmeichel1 why do goalkeepers take a step the other way putting weight on wrong foot then can’t get back to side they protect mate?”

Gray (‏@mickygray33) can’t take on more from Vergini: “OMG GET HIM OFF… Think u know who I mean.. His legs are on the wrong way round..!!! Haha I’m sorry but I have to laugh.. Go on vagina lad.”

Former Liverpool defender Roy Evans (‏@Roy_Evo) gives his thoughts on the win: “Not our best performance but most importantly we hung in there at the end and got the 3pts! Great win when we weren’t at our best, well done lads.”

Ex-Liverpool striker Adam Morgan (‏@AMorgan94) has a good feeling: “We’re going to win the league. This is our year!!”