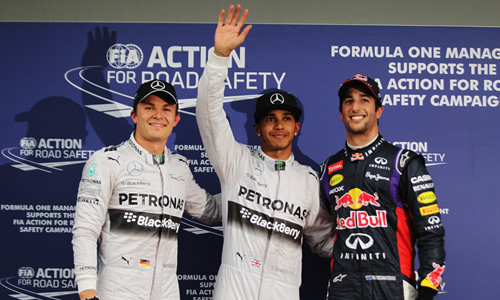 The Mercedes driver beat Daniel Ricciardo on his Red Bull debut by 0.317 seconds with the very last lap of the session.

Hamilton’s Mercedes team-mate Nico Rosberg was third ahead of McLaren’s Kevin Magnussen in fourth and Ferrari’s Fernando Alonso in fifth.

I’m really happy for the job the team did

“It’s been an interesting weekend and today has made it so much harder for everyone with the conditions, but I’m really happy for the job the team did,” Hamilton said.

“These new cars are a lot harder to drive in the wet and it was the first time for me in the wet, as I’m sure it was for a lot of people. It’s great to be up here with Nico.”

Meanwhile, Vettel insisted that there were plenty of positives to take despite not making the top 10 shoot-out since the 2012 Belgian Grand Prix.

“I think we have made a big step forward with the car, but of course I’m not happy that we didn’t make it to Q3,” said Vettel.

“I think the car is quick, but we struggled this afternoon with drivability which, in these conditions, made it even worse.

“The car seems good and Daniel did a very good job to be on the front row, so congratulations to him.

“It’s going to be a long race tomorrow and reliability will be the most important thing to make it to the flag, but I think there will be lots of opportunities for us.”

Six Nations 2014: England rack up a half century in Rome