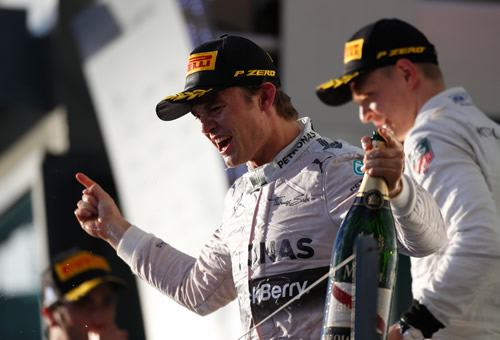 Ricciardo was later disqualified for a fuel-flow rate infringement.

There is a lot of work to do. We can still improve a lot

And defending world champion Sebastian Vettel completed just five laps before pitting and retiring due to a loss of power.

“There is a lot of work to do. We can still improve a lot and we must because the competitors are not going to be asleep.”

“It’s hard to believe,” said Magnussen. “It seems so surreal. The car was so much better than it has been at any point.

“I just had exactly what I needed the whole race. The preparation we have done this winter has been fantastic.”

And Hamilton was in philosophical mood following his early retirement.

“I was driving on five cylinders. It’s a bit unfortunate but that’s racing,” said Hamilton. “We will recover from this. It’s just a small hiccup, there’s a long way to go.”