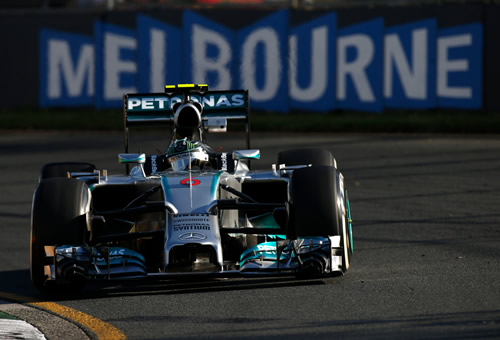 There were a few teams who struggled to master the new generation cars, with drivers and engineers alike stating the difficulty they face when trying to drive and control them. The biggest strugglers during qualifying, however, were Team Lotus and they now suffer the misery of securing the back row. It’s hard to believe that last year they won the Australian Grand Prix with Kimi Raikkonen. Lotus driver Romain Grosjean had stated preparation for the Australian Grand Prix had “been a disaster”. This was most evident during qualifying as the team faced numerous engine, electrical and braking problems across the weekend. Grosjean found it extremely difficult in the wet conditions, sliding off track numerous times and even bouncing across the gravel before fighting the car back to the track. The same can be said for team-mate Pastor Maldanardo, who also found himself off road in the gravel. The variety of problems has left the team clueless of how well the car can do on Sunday.

Can anyone stop Mercedes this weekend? It doesn’t look likely. Mercedes’ dominance was clear for all to see today. They looked close to a second clear of nearest rivals Red Bull and Ferrari. The car is clearly the quickest on track at the moment with both Hamilton and Rosberg recording the fastest and second fastest times in the final practice before qualifying even began. There superiority was confirmed after Hamilton secured pole position and Rosberg in a close third. The majority in and around the paddock agree that this weekend is Mercedes’ to lose and it is hard to see other than a silver arrow’s win. Lewis scored the 100th pole position for Mercedes-Benz power in Formula 1, a record dating back to 1954. It was also the 32nd pole of Hamilton’s career, putting him equal with Nigel Mansell and one behind Jim Clark.

For Sebastian Vettel, being the current world champion and having dominated for so long, success is expected. But when the German was unable to make the final 10 in qualifying, the home crowd jeered his failure him as he walked towards the paddock. Some could say matters were made worse when team-mate Daniel Ricciardo claimed second place, bringing delight to the home crowd. It was evident that Vettel was struggling to match the pace of the frontrunners but it was only after that we learned the issue was with the cars software programming. The four-time world champion only failed to qualify in the top three once in all of last season (ninth in China) and has been on pole in three of the last four editions of the Australian Grand Prix. But the German is unhappy with the “drivability” of his Red Bull and will start Sunday’s race 12th.