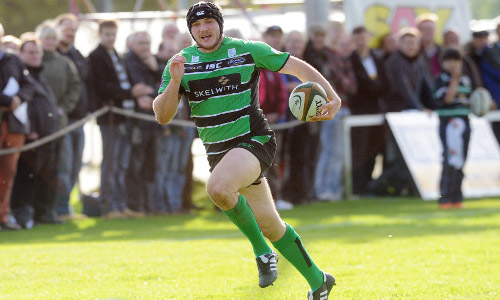 Gloucester Rugby have confirmed the signing of powerful Leeds Carnegie full-back Stevie McColl for next season.

The 25-year-old former Scotland U20 international has spent the past three seasons at Headingley and last year resisted temptations to make the step up to the Aviva Premiership.

Steve’s been a big part of their success. He’s a very strong, very powerful runner from deep and who hits good lines

After heading south from the Edinburgh Rugby Academy to seek game time, McColl’s stock rose as he made a name for himself with Championship side Doncaster Knights and was dubbed the best full-back in the division.

“He’s somebody who stands out at Championship level. Leeds are a good team, who play a particularly good brand of rugby and who are fighting hard to get into the Premiership,” said Gloucester director of rugby Nigel Davies.

“Steve’s been a big part of their success. He’s a very strong, very powerful runner from deep and who hits good lines. He was part of the Edinburgh Academy at one stage and moved to get more opportunities.”

After making the switch from south to west Yorkshire, McColl has earned the Players’ player of the season accolade and a place in the RFU Championship Dream XV – voted for by Championship coaches.

He has again found try-scoring form this season, running in seven times for the third-place side.

With injuries blighting Scott Johnson’s Scotland squad in November, he received a late call-up as cover, but failed to make the match-day squad, but Davies recognises McColl’s talent and is keen to see how he performs in the competitive nature of the Premiership.

“As a result of playing in the Championship, he’s gained a lot of experience and he’s shown his quality,” Davies added.

“I’m very excited about this guy. Both he and Mark [Atkinson, announced earlier this week as signing from Bedford Blues] can make the step up from Championship level rugby and be a huge success.

“We’re bringing really explosive players into the back line, who have got a big physical presence and that’s important.”

McColl will be following a similar path to Rob Cook. The former Cornish Pirate was a late addition to Gloucester’s squad before the 2012-13 season and has gone on to become a first team regular.

McColl joins a long line of Scots to switch to Kingsholm including internationals Bryan Redpath, Chris Paterson, Scott and Rory Lawson, Jim Hamilton and Al Strokosch while Edinburgh captain Greig Laidlaw will also make the move to the Cherry and Whites in the summer.