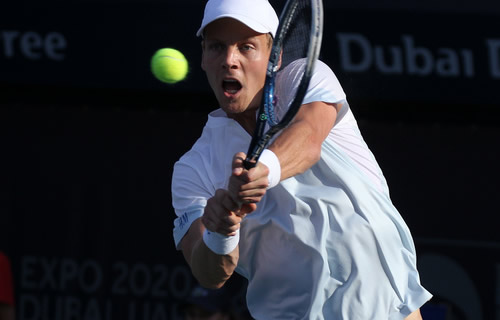 Perhaps it was not surprising that Philipp Kohlschreiber, the world No25 and in Dubai after one of his best-ever seasons last year, did not sound entirely confident ahead of his semi-final clash with the formidable Czech, Tomas Berdych.

The elegant, light-footed man from Germany was giving away 7in in height, 21kg in weight and more than two years in age—he is 30 to Berdych’s 28. They were also separated by 20 or so places in the rankings and Kohlschreiber faced a 1-7 deficit in their previous matches, his only win coming in 2009.

It was not promising, as his words ahead of the match suggested:

The ‘different’ would need to be what Kohlschreiber does best, the tactics he has deployed to great effect in the past. He has, after all, beaten Rafael Nadal on grass, John Isner on hard courts and Richard Gasquet indoors, with quickness, touch, angle and accurate serving.

Surprisingly for a man of his stature, perhaps, the German was second only to Roger Federer among the four semi-finalists in aces in the tournament and second in the entire draw in points won behind his first serve.

But when it comes to serving, Berdych is always as formidable as his stature: He has the best percentage of points won on first serve on the tour this year. But… the wind had arrived in Dubai and was swirling around the Centre Court, and Berdych has a remarkably high ball toss. Would that make a difference?

In a stunning opening passage of play, it looked as though the wind was the least of Berdych’s problems. It was all about the flair, footwork and confidence of Kohlschreiber. He broke that near-impenetrable Berdych serve in the first game and held with ease to take a 2-0 lead. He held to love for 3-1, served-and-volleyed in glorious style for 4-2, and served out to 15 for a 5-3 lead.

The Dubai crowd became captivated by the style and shot-making of the German, though Berdych has garnered plenty of support here too, for his calm and impressive attitude as much as his formidable tennis.

But come the acid test, it was the difference in the mental resilience as much as their physical disparity that proved decisive. Serving for the set, the German made two errors to bring up break-back points and Berdych powered a forehand winner to level the score.

He needed no more of a confidence boost than that, and served to love with an ace before slamming into Kohlschreiber’s serve to take the set, 7-5.

Only once did Berdych come under any real pressure again and that was in the first game of the second set. He held off deuce but would not have to do so again.

Kohlschreiber had promised to be aggressive, and to his great credit, he did not waver. In the fourth game, he fought boldly against increasingly heavy odds, surviving two break points and valiantly leaping at the very boundary of the court to retrieve a huge Berdych smash. The German’s shot went wide but the Centre Court cheered his effort to the heavens.

Indeed the serving that had characterised Kohlschreiber’s tournament was still looking in good shape and he dropped only two points on his next three service games. But come the crunch, serving to take it to a tie-break just as he had in the first set, he conceded a decisive break point and the set, 7-5, and Berdcyh advanced to his second final in succession in Dubai, and his second in the space of a fortnight.

The Czech man won in Rotterdam, and will be confident of winning this title too after beating his final opponent, Roger Federer, in their last two matches.

He was put on the spot about who he would prefer to play in the final, and eventually plumped, perhaps not surprisingly for Federer over Djokovic, but added:

“But really I think just let the better win. I think it’s a match of two greats, and I need to be really ready for both of them no matter who’s gonna win and try to bring my best game for the final.”

And then confronted with Federer’s appraisal of his game as ‘being on the brink of something…’, Berdych was clearly chuffed:

“Of course it’s very nice to hear from a gentleman like Roger is and with all his experience and everything that he has achieved. That’s really nice. But again, you know, if it’s the match with him or whoever else, everything always start from the zero, and you have to keep going, keep playing well, and that’s the main focus.”

And a focused Berdych against an aggressive Federer should produce a very fine final indeed.