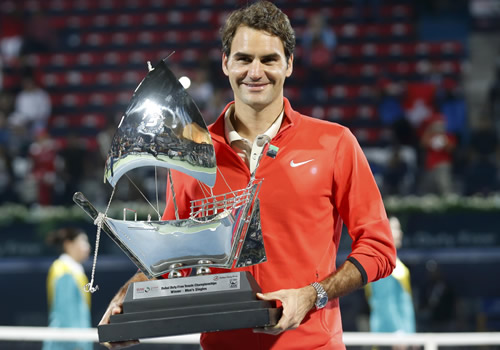 As dignitaries, sponsors, media and—the beating heart of the Dubai Duty Free Tennis Championships—the fans gathered around Centre Court for the final match of 2014, there was a palpable sense of rightness, perhaps even relief, that the king of this particular stage was back where he should be.

Roger Federer, feted wherever he plays after almost 14 years of winning titles and setting records, is welcomed—indeed loved—as a local in this hot, multicultural, optimistic corner of the world. He owns an apartment here, trains here, and has returned to play at its showcase event no fewer than 11 times.

That he was chasing a sixth title here after a tough 2013 of back injury, a slip from No2 to a current No8 in the rankings, a second-round exit at Wimbledon and a fourth-round loss in New York, explained the sense of relief, of pleasure, in anyone you talked to.

For Federer started 2014 with restored passion, a lean body, a new racket and a new coach in his team. He reached the final at his opener in Brisbane, beat Jo-Wilfried Tsonga and Andy Murray on his way to the semis at the Australian Open—and played Davis Cup, too.

He talked, ahead of Dubai, of his best tennis being just around the corner, and was now proving it, too. He cranked up the level through each round and made a quite stunning comeback against the top seed and defending champion, Novak Djokovic. Federer has always been an attacking player, but here was aggression on another level: He chased to the net at every opportunity to turn around a first-set deficit against the Serb for the first time in their 32 meetings.

Federer’s final problem was a big one. Tomas Berdych beat him in their most recent match, here in the semis last year, and also in their previous meeting at the US Open. And the big Czech seemed steadily to improve—in fitness, in confidence and in match-wins. He reached a career-high No5 last year, and was set to match that this week. He completed his set of Grand Slam semis in Australia and arrived here on the back of the Rotterdam title and on a personal-best winning streak of 11.

Berdych’s run was not easy, either, with the dangerous Sergiy Stakhovsky, then No5 seed Tsonga and No7 seed Philipp Kohlscheiber. But Berdych reached the final without dropping a set and with the best first-serve record in the tournament—and on the tour this year. As Federer pointed out of his formidable opponent: “He seems like he’s on the brink of something…” It was unspoken, but it felt like he had a Grand Slam in mind.

So could the king of Dubai, who had already beaten the second and third-ranked Czechs in Radek Stepanek and Lukas Rosol, make it Czech-mate against Berdych?

It began shakily, very much as Federer’s match against Djokovic had. Berdych looked strong, solid and smart—a lethal combination with such power at his disposal. And Federer was also slow to get into his rhythm so that he more often than not threw away his advantage with an error—and most surprisingly of all, with a forehand error.

The first game summed up what would unfold through the first set: Federer had chances, but shanked, or hit wide, to let Berdych ply his trade. The Czech also began tightly, and his own forehand let him down in the second game to offer up an early break, but he quickly remedied the situation with some stunning returns off a growing number of second serves from Federer. 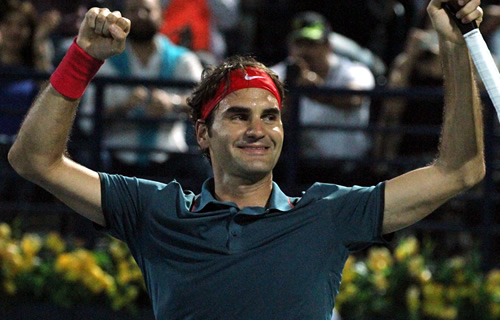 It was the same story at 2-2, a chance gained, a chance lost, and again Federer conceded a break as his second serve was fiercely punished.

With no first serve, Federer was struggling to get to the net and, when he did, he was passed. Meanwhile, Berdych was ruthless—just as had been against Kohlschrieber—and served out the set, 6-3, with 213kph ace.

The second set began in a similar vein. Federer held the first game but let Berdych off the hook in the second with a couple of dreadful forehands. In a very uncharacteristic show of emotion, he stood with hands on hips gazing at his box. Berdych thumped down a 217 ace and held.

Berdych made his move in the fifth game—you could imagine him saying “check”—as Federer made a dire opening drop shot, lost a net rally and faced break point. Twice the Swiss saved break point with an ace, but on the third he hit a forehand wide: On the dot of one hour, he was a set and break down against the best server on the tour this year.

But just as he had done the night before, he now made a stunning, attacking response. He broke straight back, and then two love holds as good as scent-marked the court. In a dramatic reversal, Berdych’s first serve vanished and Federer broke to love for the set, 6-4.

I played a lot of tennis already this year, and I feel like it’s a very good stretch for me right now

The third saw Berdych regroup with impressive resolve. He recovered from 0-40 in the second game, and with Federer again missing his first serve, Berdych worked a break point. Federer once more fought off the threat and fed off the frustration of Berdych to make his own breakthrough.

Still it was tense stuff—and impressive resolve from Berdych—as Federer went 15-40 down at 4-2. Despite a double fault, he held, and produced some clutch serving to take the set, 6-3.

There were many things for Federer supporters to celebrate in this 78th title of his career. First there was the small matter of the record books: His sixth Dubai title took him to third place on the all-time list of title-winners, behind only Ivan Lendl and Jimmy Connors. It also extended his streak of winning at least one title every year to 14 years.

But just as in his previous matches here, it was more the nature of the win that brought not just relief but belief—that Federer is far from done among the big boys.

He confirmed that he was not just feeling back to his physical best but to a very confident place mentally:

“It’s been a tough week. I have a lot of tennis in my body over the years: I’m happy that I can do these weeks. I played a lot of tennis already this year, and I feel like it’s a very good stretch for me right now…

“I’m just happy that I’m healthy again and that I can focus on tactics and not focus on whether I’m feeling all right when I wake up tomorrow. I went through that weeks and months, like every day I hoped there was going to be a little improvement. I only started to feel that improvement halfway through the US Open maybe, so it was a long time.

“Now I don’t have to think of it, and I can just play tennis. When you can play that way, you’re more free, you have an open mind. That’s when usually you are more successful.”

He has, thus far this season, beaten Djokovic, Murray, Tsonga and Berdych among the top 10, and he beat Juan Martin del Potro and Richard Gasquet at the end of last year. And while the conditions will be different in Indian Wells and Miami—slower, for a start—one senses Federer will not be for turning.

He wants to play off the front foot, and his new racket is certainly helping him to do so. And as long as his serve is in good order, his Edberg-honed net skills are sure to be on full show.

It may not always produce checkmate for the resolute chess master, but in Dubai, it was undoubtedly Czechmate.