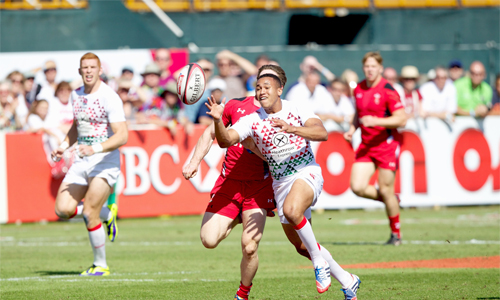 England Sevens will take on Wales in a one-off international staged after Sunday’s Six Nations clash at Twickenham.

With the sport set to join the Olympics in 2016 and the Commonwealth Games competition to take place in Glasgow this summer, the exhibition match will be a chance to expose the Sevens form of the game to a larger crowd and a new audience.

The teams have met twice this on the IRB Sevens World Series circuit this season, but while the Wales senior 15s team have beaten England in the last two Six Nations championships, in Sevens England have the upper hand, winning 33-12 in Dubai in December and 21-7 in Wellington last month.

“We’re delighted to be able to showcase international sevens with England playing Wales on such a great stage in front of our fans,” RFU chief commercial officer Sophie Goldschmidt said. “Our thanks go to the BBC who are helping us reach a live television audience via the Red Button with this special game.

“Sevens is exciting, dynamic and reaches a growing global following as it heads towards its debut at the Olympic Games in Rio in 2016.

“Both teams on view at Twickenham Stadium take part in a thriving World Series, which concludes with the Marriott London Sevens on 10-11 May, and will be heading for the Commonwealth Games in Glasgow later this year with medals in mind.”

England are fourth in the World Series after five rounds of the nine events already complete and are preparing for the next two tournaments in Tokyo and Hong Kong this month before the series heads to the UK for the final rounds in Glasgow and London.

“This is a fantastic opportunity to be part of such a prestigious rugby occasion,” said Wales Sevens head coach Gareth Williams. “It also provides an opportunity for a number of our development players to stake a claim for a place in the squad to travel to Tokyo and Hong Kong later this month.”

England Sevens Head Coach Simon Amor added: “The whole squad is looking forward to the chance of being a part of such a massive rugby occasion at Twickenham Stadium.

“We get great support from the senior coaches and players, and our aim is to perform at a level that does them and the shirt proud as our players fight it out for places at the next two World Series tournaments in Tokyo and Hong Kong.”

The match will be broadcast live during the BBC TV Red Button Six Nations Forum at 17:15 GMT on Sunday 9 March.