EXCLUSIVE: Ireland are a genuine threat to the top sides at the World Twenty20, according to former Australia captain Ian Chappell 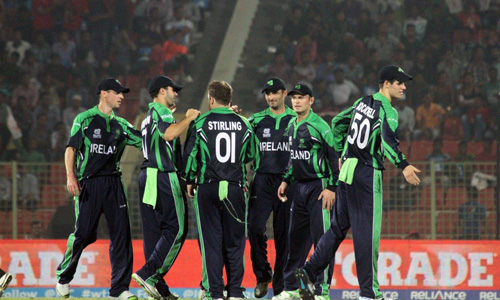 Ireland are no longer cricketing minnows and have the ability to beat the top sides at the World Twenty20, according to Ian Chappell.

The former Australia captain spoke in glowing terms about the current state of Irish cricket as William Porterfield’s T20 side moved to the top of Group B on Wednesday.

Ireland recorded a 21-run victory over United Arab Emirates on the Duckworth/Lewis method to leave them needing victory over the Netherlands on Friday to reach the Super 10 stage.

Chappell is confident that the Irish have the quality to progress on Friday and tipped Porterfield’s men to spring a surprise and reach the knockout stage.

“Any major team that doesn’t take Ireland very, very seriously and keep the pedal to the floor is making a huge mistake and is likely to get beaten,” Chappell told The Sport Review following the ESPNcricinfo awards 2013.

Offering an antithesis to Roy Keane’s analysis of the Republic of Ireland at Euro 2012, Chappell believes that Porterfield’s side aren’t making up the numbers in Bangladesh but harbour serious ambitions of making a real impact.

“They don’t turn up at these tournaments just to be, ‘look at us, we’ve made the World Cup, isn’t it fantastic’, they actually come along to do as well as they can and get as far as they can,” Chappell added.

“That has been a really important factor in the success that they have had. I’ve admired what Ireland have done.

“I don’t think for the moment that they could win it. If they could get to the [knockout] stage, they can be proud of that.”

Ashes-winning Aussie captain Chappell believes that the secret to Ireland’s success is their team ethic, although the former batsman holds special admiration for Kevin O’Brien following his memorable display against England in 2011.

“They do play as a team. Everybody contributes and everyone puts a shift in,” Chappell continued.

“Obviously Kevin O’Brien’s performance in the 50-over World Cup against England was hugely impressive. I think if you look at Ireland’s success, it’s never one or two blokes doing it all the time.

“Everyone seems to contribute. They play well together as a team.”

The West Indies have been a bloody basket case now for some time. Get them sorted out before you bring in new nations

Last month, Ireland received a boost after the ICC approved the proposal to allow the Associate nations the chance to compete for Test status.

The winners of the next Intercontinental Cup will have the chance to face the bottom-ranked full member in a play-off.

But Chappell believes the cricket’s governing body should address the demise of Bangladesh, West Indies and Zimbabwe before considering giving any other nations Test status.

“It is ridiculous Bangladesh was given Test status and still have it. They haven’t done anything.

“I don’t think Ireland should get Test status but they’re certainly more deserving than Bangladesh. There has to be a better system.

“The West Indies have been a bloody basket case now for some time. Get them sorted out before you bring in new nations. It’s ridiculous to have Bangladesh and Zimbabwe in recent times. Neither are good enough.”

He continued: “For example, a second tier system where you are playing fourday games and every now and again you play Australia A or India A playing against teams like Ireland, Netherlands, Canada and you see how they’re progressing.

“That way the team has an idea what it has to do to get to the next level and the administrators get a better idea of which teams are coming closer and closer to Test level.

“There is no real system like that. At the moment, for Christ’s sake, get some of the major nations sorted out.”