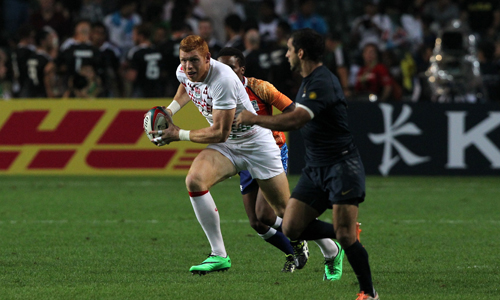 Defending Hong Kong Sevens champions Fiji got their title defence off to perfect start with a convincing 42-7 win over last year’s finalists Wales in their first Pool A match of the weekend.

Wales took the lead early in the first half, but were unable to live with the pace and power of the Pacific Islanders as Samisoni Viriviri—this year’s leading try-scorer in the IRB World Series—was at it again as he ran in twice with the series’ second highest points scorer Emosi Mulevoro adding 15 points.

“When you give that standard of opposition some loose tries they have the ability to just run away with it—all they want is time and space and you can’t afford to give them that—the first minute of the half when we took that away from them we showed they can be ordinary but we have to keep that to a sustained level throughout the game,” said Wales head coach Gareth Williams.

“The shape was good and the boys were in position but you can’t have boys falling off tackles – that simply isn’t good enough at this level. That proved costly for us against a quality side like Fiji. They’ve got such talented individuals they can take advantage of that and they just flooded through on us.”

Kenya topped Pool A going into the second day after running in seven tries in a 41-0 demolition of new comers Sri Lanka.

James Rodwell celebrated his 50th sevens tournament with this 68th try as England edged Argentina 19-12 in Pool C with captain Tom Mitchell adding the other two tries as he extended his number of tries this year to 24.

John Moonlight was again the stand-out for player with a brace of tries for Canada in their 35-7 win over Portugal which puts them top of the Pool C table.

Current Series leaders South Africa were too strong for France as Seabelo Senatla ran in two tries in a 31-7 win to go top of Pool B, while Australia’s leading points scorer Cameron Clark scored 11 points in their 28-14 win against Spain.

After being displaced at the top of the series table after the Tokyo Seven, New Zealand returned to winning ways with a 33-0 win over Scotland in Pool D as Gillies Kaka and Marty McKenzie scored nine points each.

In the other match, USA defeated Samoa for the second time in a week as Zack Test maintained his impressive performance with a brace of tries in their 26-12 win.

Hong Kong, Japan, Italy, Russia and Zimbabwe all went unbeaten on the first day of the World Series qualifiers with one of the 12 teams competing to join the core sides in next season’s World Series.

Lote Tuqiri scored two tries in both of Japan’s wins as they ran in 65 unanswered points against Uruguay and Trinidad and Tobago.

Hosts Hong Kong defeated Tunisia and American Samoa, with Yiu Kam Shing running in twice in a 19-7 win over Tunisia before Rowan Varty did the same in their 38-7 win against American Samoa.

Stephan Hunduza produced a hat-trick and Lenience Tambwera scored 19 points as Zimbabwe thrashed Barbados 49-5 before edging out Chile 19-14, with Handuza adding a further two tries to his tally.

Andy Vilk’s Italy beat American Samoa 31-12 and Tunisia 17-12 with Kaine Roberton scoring the winner in the latter while Evgeny Nepeyvoda was the hero for Russia on day one, scoring twice in their 40-10 win against Barbados and the winner as they snatched a dramatic 17-12 win in their opening match against Chile.