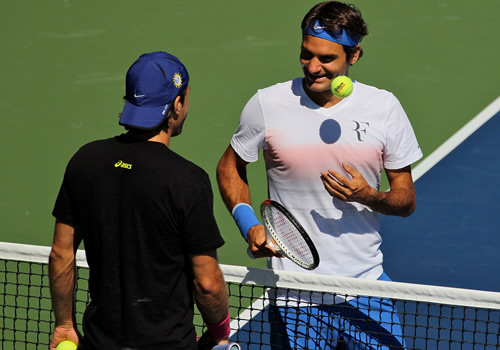 As he arrived with burgeoning family in tow to this tranquil corner of California, this mountain-fringed desert resort of Indian Wells, Roger Federer must surely have felt entirely at home.

He mentioned, when he took his fourth title here in 2012, that he had once found the place a little quiet for his young taste, but had now reached an age and a stage in his life where he appreciated its peaceful beauty and lifestyle.

But then how could he not love a place that has, over the 14 years he has plied his trade here, yielded so much success and such passionate support?

For these days, his practice sessions are more packed than many matches in the Tennis Garden. His doubles forays with popular compatriot Stan Wawrinka have been standing room only. His childhood hero and new coach, Stefan Edberg, has garnered as much fandom as he has, and just to round things off nicely, his wife Mirka is growing and glowing into her second pregnancy.

Indian Wells last year, though, did not provide the tennis idyll that Federer had grown used to. He picked up a back injury that took months to resolve, and his results and ranking suffered.

A year later, with form, fitness and results turned back in his favour, he has lost only two matches in 18, has his first title in eight months, and has scored wins over some key—and younger—rivals who had each won their previous matches over the Swiss: Novak Djokovic, Andy Murray, Jo-Wilfried Tsonga and Tomas Berdych.

So when Federer was asked, after winning his 44th match here to advance to the fourth round, what had prompted him to write “#happy” after his name on the camera lens, no wonder he was confused by the question.

When he talked of his year so far, though, he admitted to more than just happiness: more to a contentment that he was back to where he wanted to be—and not just to Indian Wells: “I feel different this year. I feel like if I do play my best I can come through again. That’s like a major difference, you know. [But] it’s one thing feeling it, it’s another thing really getting it done. That’s why the victories against Jo and Murray and also now Djokovic and Berdych were big wins for me to start off the year.

“Now I feel like I’m in a good place. Zen on the court. I know what my solid level is. I just feel like I was calm and served for the set. Okay, got broken. Still managed to stay calm. Down a break in the second, stayed calm and came back. So those are the moments where you feel there is confidence around somewhere.”

Not that the draw had fallen particularly benignly for him. His quarter was a challenging one, with the new Swiss No1 and Australian Open champion Wawrinka—a man still to lose a match this year—his scheduled last-eight opponent. And this quarter became the only one where all the designated seeds advanced: no short-cuts, though should he reach the semis, his toughest adversary Rafael Nadal, was gone, along with Murray.

Before all that, though, was a pleasure of a match—for the two men involved as much as for fans of elegant, one-handed, shot-making tennis.

For it brought Federer face-to-face for a 16th time with fellow over-30 father and long-standing friend, Tommy Haas.

The German, 36 next month, first played a teenage Federer at the Sydney Olympics 14 years ago, beating him to the silver/gold final. When they met two years later, again in Australia at the Open, Haas was at No2 in the world and won an epic five-setter. But he would win just one more match to take the Halle title in 2012.

Not that Haas had not often give Federer a scare: He came very close to knocking the Swiss out of the French Open in 2009, denied by an all-or-nothing winner on break point in the third set from Federer. And Haas was up a set in their last two matches, both last year, in Halle and Cincinnati.

But along the way, Haas’s career was littered with surgery, injury and accident. He made comeback after comeback, his latest surge beginning from a ranking of 205 in 2012 to No12 at the start of this year.

There was, again, a slight question-mark over the German’s fitness. Twice this year he had retired with a shoulder problem, first at the Australian Open and then three weeks ago in the semis of Sao Paulo. But he had taken out a couple of tough opponents in Indian Wells, including No19 seed Kei Nishikori, in straight sets. Federer could have his work cut out.

Haas opened in the best possible way, serving to love, Federer slightly less so with a double fault along the way.

Come the fifth game, the beautiful tennis broke out with a vengeance in a 30-shot master-class of single-handed swipes on both wings, top spin and slice, defence and attack. Haas came off the better but on the next point, Federer cut it short with a killer drop shot and forced a net error for break point. Haas served big to stand his ground but after three deuces, Federer stepped in for a drive volley winner to create another break point. He would brook no argument, and broke after more than 20 minutes of intense tennis.

Haas was playing just as well as Federer, though, and took the Swiss on through another long chess-like game, and his picture-book backhand converted on the fifth break point. It was level again, 3-3.

It was clear that they knew each other’s game to perfection and only the best shot placement would work. Federer snatched back control, 0-40, Haas closed to deuce, but Federer finally broke through again. New balls helped him hold, 6-4. With more winners, fewer errors and nine points won at the net, Federer had the marginal edge over Haas across the board.

The second set began with more of the same: intense, fast and multi-faceted. Federer earned two break points in the fifth game with a couple of inch-perfect down-the-line backhands, but it took two more to break.

The point of the match was still to come, the first point in the eighth game that Federer appeared to win four times over yet Haas somehow found a reply. Federer held anyway and despite the German’s best efforts—and they were very good indeed—his friend was playing close to his own best.

The scoreline read 6-4, but it belied the quality of the contest. It was the kind of treat, indeed, that kept British fans up until the early hours.

And if Federer needed any more excuse to love Indian Wells, the draw provided it again. His biggest obstacle before the final, Wawrinka, also fell by the wayside. The world No3, carrying a back strain, was beaten 7-6(1), 4-6, 6-1, by No17 seed Kevin Anderson, ending the Swiss man’s perfect 2014 run.

The in-form Anderson, who entered Indian Wells at a career-high ranking after back-to-back finals in Delray Beach and Acapulco, recorded his 150th match win.