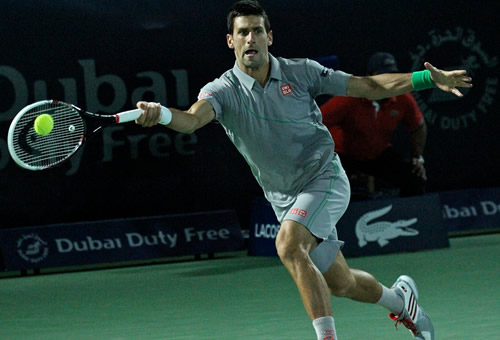 When world No2 Novak Djokovic took to court to play his way to his first final of the 2014, he was aware that John Isner had got the best of him twice on American hard courts. In 2012 it was in the semi-final in this very Indian Wells arena.

Those matches both took three long, tough sets to resolve, and Isner had been showing the same form on his home ground again this year after suffering an ankle injury at the Australian Open.

He was fresh from a semi-final finish in Delray Beach and then took out strong opposition at Indian Wells, in particular Ernests Gulbis in the quarters. It had all guaranteed him a return to the top 10 for the first time since that 2012 Indian Wells final.

But the first set this time suggested that the Djokovic form was on the up, boosted no doubt by a dominant performance in his hour-long quarter-final against Julien Benneteau.

In the third game, Isner faced break points, the third of them after a double fault. But he dug in, survived three deuces and more than six minutes to hold.

Considering the Isner serve is his outstanding strength—and he had knocked in a cool 51 aces in the tournament so far—it was Djokovic who looked the stronger on that front, and by 3-3, he had not dropped a single point on his own serve.

But all at once, the boot was on the other foot as Djokovic went 0-40 down. However, Isner could not capitalise. Conversely, and in dramatic style, Djokovic earned break points of his own in the very next game, reading the Isner serve with apparent ease, and he broke. It was the work of a moment to serve out the set, 7-5.

The second set had a similar feel. Isner opened on serve but faced deuce straight away, and come 4-4, he faced break points. Djokovic was ruthless in making Isner play rallies from the baseline, and though the American was admirable in trying to chase down balls, he is neither a nimble nor a fluid mover. Djokovic broke and served for the match.

But the contest was about to take an unexpected and dramatic turn. Though Djokovic was head and shoulders above Isner in holding his service games, he faced break points, too, as Isner somehow found a couple of huge forehands and then raced to the net for a volley finish. The American levelled at 5-5.

Isner faced deuce again, then break point, and hit a forehand wide to concede another break. This was surely his death knell. But no, Djokovic went 0-30 down, received a time violation warning, faced three break points and saw another scorching forehand zip past for a second break back. They would play a tie-break, and that is Isner’s speciality.

Sure enough, the American did not disappoint. One backhand down-the-line return of serve and he was up a mini-break. Another, and he was 5-1 up, and a forehand winner took it to 6-1. Finally, the underperforming Isner serve came to the party and aced for the set, 7-2.

But already, the long-legged American had needed some physio on his left knee—the one that takes his weight during the serve, and now, with the match edging to two hours, he took some further treatment. He looked ponderous between points but continued valiantly to chase down every ball.

However with the foundation of his game, his serve, letting him down, he had to fight off deuce in the first game and, come the fourth game, he double faulted on break point. Djokovic, meanwhile, had vented his frustration by hammering his racket to the ground, and it seemed to lift the weight from his shoulders. Despite facing one more break point, his serving was close to its best once again: He missed only four points out of 22 on his first serve.

Isner took more deep manipulation to his knee, but it was to no avail. Djokovic broke to take set and match, 6-1.

It set up a highly anticipated 33rd meeting between Djokovic and Roger Federer, a rivalry that is separated by just two matches in the Swiss man’s favour. But their last three matches, all played in the last six months, have gone to the full three sets. Djokovic won their indoor contests at the Paris Masters and London’s World Tour Finals, but Federer took the title in Dubai a fortnight ago.

As for their only previous meeting at Indian Wells, that was also a three-setter. Djokovic defeated the Swiss three years ago in the semi-finals before going on to win his second crown.

Whether the slower surface of Indian Wells will allow Federer to play the hyper-aggressive tactics that he used against Djokovic in Dubai is doubtful: He has not raced to the net as readily here as he did throughout Dubai.

One thing’s for sure, though: It will be another intense, intelligent and tight contest between two men eager to take the other’s scalp in this prestigious tournament.