Indian Wells 2014: Gulbis tops Dimitrov in rivalry of the future 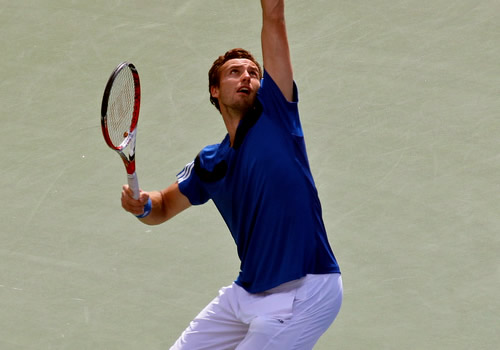 The biggest name to play for a place in the fourth round in the bottom half of the Indian Wells draw was unquestionably the No2 seed and two-time former champion, Novak Djokovic.

Nevertheless, with some of the Serb’s biggest threats already gone—Juan Martin del Potro and Jo-Wilfried Tsonga in his quarter and Tomas Berdych in the top section—and a near-unknown in place of his designated third-round seed, Djokovic’s match was one of the lower profile contests in a packed schedule.

For the sweeping aside of eight of the 16 seeds in his half had opened the way for a new name to step it up in the desert. The big question was whether it would be one of the tried and tested old guard—a Spaniard such as Fernando Verdasco, Feliciano Lopez or Tommy Robredo, a Frenchman like Richard Gasquet or Julien Benneteau—or one of the wave of young guns making very distinct marks during the early months of 2014.

There were, in fact, a remarkable six over-30s in action, and the first to advance was the 32-year-old Lopez, in a tough three sets—and in a promising seedless section of the draw. But it was on Court 2 where the most compelling of these inter-generation stories would be played out.

It all began with two former No7s, good-looking players with good-looking tennis: 27-year-old Gasquet against 30-year-old Verdasco. And they sizzled from the very start, the Frenchman’s glorious attacking single-handed backhand against the red-hot forehand of the left-handed Spaniard.

But it was Verdasco who produced tennis reminiscent of his heyday in 2009 to accelerate away, 7-6, 6-1. He will next play either John Isner or Yen-Hsun Lu.

The late afternoon brought the youngest man left in the draw, the fast-
rising, exciting talent of 20-year-old No101, Dominic Thiem, against the wily campaigner, the 32-year-old No65 Benneteau. Both had already beaten Frenchman ranked considerably higher—No21 Gilles Simon and No9 Tsonga respectively—and now played to challenge Lopez for a quarter-final place.

Between these two matches came one of the most anticipated contests not just of the day but of the week. While the match between Ernests Gulbis and Grigor Dimitrov may have suggested experience taking on youth, that was far from the case.

Certainly the No20 seed Gulbis was the elder by three years, but the 25-year-old had soared early and then fallen back as he failed to handle the demands of fame and elite-level competition. Now he was rising again in a mature and determined fashion, a man who admitted after a stand-out run in Rotterdam that he still didn’t enjoy the hard ground-work but did not want to end his career knowing he had not fulfilled his talent. And talent he assuredly has in spades.

Last month he broke into the top 20 for the first time with a semi finish in Rotterdam, the title in Marseille and quarters in Acapulco, taking two top-10 scalps in the process.

As for 22-year-old Dimitrov, he has been a star in the making ever since winning the Wimbledon junior title, but took time to grow into his multi-faceted talent and long, lean frame. With a fluidity of shot-making often compared with Roger Federer’s, it’s taken time to develop his game, strength, speed and determination, but last year saw the first fruits with two finals—one yielding the Stockholm title—and this year he stepped up not just to a career-high No16 but to his first Grand Slam quarter-final and first 500 title.

These two attractive, creative players also have big personalities and this, their third meeting in a month, promised to have plenty of personality too: they had shared the honours in Rotterdam and Acapulco.

Dimitrov began with intent, attack and energy. The first three points of the match were worth the price of admission alone, and Dimitrov broke. The Bulgarian’s movement is one of the most improved aspects of the last six months, and with it has come confidence and purpose. He chased down drops, threw up lobs, countered with a behind-his-back reply, and had the crowd on their feet with a 2-0 lead.

Gulbis looked shell-shocked, but he too has applied himself to improving both his fitness and his mental fortitude. Not that he seemed able to find an answer to the showcase of shots that Dimitrov produced. The Bulgarian dived to the ground for a winning volley, hit a couple of aces, returned the Gulbis serve with interest, and broke again to lead 5-2. In under half an hour, he had served out the set, 6-2.

Gulbis beat a hasty retreat with a change of shirt in his hand. Could he find his A-game at the same time, or would Dimitrov go off the boil just a fraction? If the answer was no, this would be a very fast match.

In practice, it was a little of both. Gulbis served more strongly, began to pummel the Dimitrov backhand with more penetration, and the Bulgarian’s attack backed off just a little.

The result was a break for Gulbis in the fourth game, consolidated with a love hold for 4-1. Now it was Dimitrov who was rattled. In less time than it took to win the first set, he had lost the second and managed just one winner to 11 errors. Gulbis, meanwhile, had turned his stats to the positive side: seven winners, five errors and four out of four won at the net.

This time Dimitrov went off court: Which Bulgarian would return? He came back refreshed, but Gulbis was also still in full flow. The Latvian saved a break point in his first service game with an ace but wasted a break point in the fifth with a wild backhand. He earned another from a complex, beautiful 29-stroke rally, and wasted that too: Time for a broken racket but not a broken Dimitrov serve.

If anything signalled that Dimitrov had taken the momentum, it was the next game. He created a break point with a soaring backhand smash and then Gulbis got into a debate with the umpire that lasted in excess of a minute and earned a time warning. However, the Latvian responded with an ace. The game had taken almost 10 minutes, but Gulbis held.

He then let his opponent off the hook at 4-4 and 15-30 down with two wayward returns of a second serve, but now fully focused, he did not do so again at 5-5. He converted his break chance with a backhand winner down the line and, now as focused as at any time in the match, the 2014 model Gulbis served out in style.

He ended with 10 aces, 31 winners and 14 out of 17 points won at the net—but more importantly, an edge in a match-up that has the makings of a long and thrilling rivalry if both men continue to evolve so strongly.

Gulbis will now attempt to reach a Masters quarter-final or better for the fifth time when he meets the unheralded No53, Roberto Bautista Agut, who reached the fourth round after winning his second consecutive three-set match against Finn veteran, 32-year-old Jarkko Nieminen.

As for Djokovic, he did indeed beat his lowly opponent, but not before conceding a patchy second set. So he will need to up his game to take on one of the form players of the year so far.

Marin Cilic became the first player in 2014 to record 20 match wins when he beat Robredo, 6-4, 6-3, in 82 minutes. The Croat, a former No9, has lost just once in his past 17 matches: He reached three straight finals in February, taking titles in Zagreb and Delray Beach plus a runner-up trophy in Rotterdam.