Indian Wells 2014: Andy Murray is out after a three-set defeat by 10th seed Milos Raonic in round four 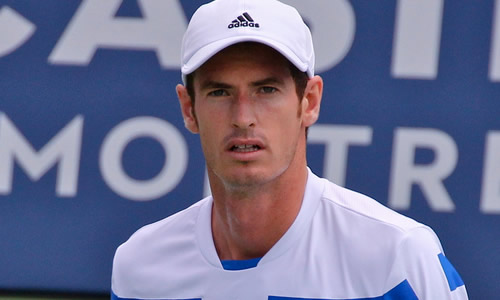 With almost a week of action and 80 men down, Indian Wells prepared for one of the most intense days of competition in the entire tennis year.

The last 16 men left standing were all contesting a place in the quarter-finals, packing out the sibling indigo and green show courts, both of which hosted big names with big ambitions.

However it was the huge Centre Court that got the pick of the crop: all four of the remaining top-eight players, each of whom faced a top-20 opponent except the highest remaining seed, No2 Novak Djokovic.

The Serb would bring the evening session and the quarter-final line-up to its conclusion, but although he played the No24-ranked Marin Cilic, it was far from a foregone conclusion.

Cilic was proving to be one of the form players of the season so far, and the first to score 20 wins in 2014 with his speedy win over No16 seed Tommy Robredo. Inspired by new coach Goran Ivanisevic, the 6ft 6in Cilic already had two titles from Zagreb and Delray Beach sandwiched by the final in Rotterdam, to lift him from a ranking low of 47 at the end of last year. Conversely, Djokovic was yet to find his best form—though even his sub-par form is a fearsome place.

Closing the afternoon session was four-time Indian Wells champion, No7 seed Roger Federer who, unlike Djokovic, appeared to be finding his best form since he was hit by back injury at this event last year. He played fellow father, veteran and friend Tommy Haas for a 16th time in what promised to be the most elegant match of the day.

Since winning the title in Dubai, Federer had put together one of the strongest runs among the Indian Wells seeds: 16-2. However his compatriot, Stan Wawrinka, who would play immediately before Federer on Centre Court, was arguably the hottest player of the year. He had yet to lose in 13 matches, was ranked at a career-high No3, and was the Australian Open champion after beating both Djokovic, Tomas Berdych and finally Rafael Nadal.

But leading off the elite quartet on Centre Court was Andy Murray against the next highest player in the fourth round, the formidable 6ft 5in No10 seed, Milos Raonic.

Murray had not had things all his own way in Indian Wells, dropping his opening game in both previous matches. He was clearly still becoming match-hardened and, when he had come up against top players in their best form, he had taken losses: Federer in Australia, Grigor Dimitrov in Acapulco.

But Raonic too, now working with a former Indian Wells champion Ivan Ljubicic, had not played since losing in the third round in Australia as he recovered from an ankle injury.

What made the match-up particularly intriguing was their record. They had only played three times, all in 2012, when the Canadian was still only 21 years of age, and Raonic held a 2-1 advantage.

His game back then was still a work in progress, and he would showcase against Murray in this fourth meeting how far he had come, in his movement, his attacking mind-set and net skills.

Raonic straight away laid his cards on the table in his opening serve: three aces, already cranked up to over 130mph, a big forehand, and interrupted only briefly by one backhand winner from Murray.

The Briton, distracted by a something overhead, double faulted and netted a blistering forehand return from Raonic but eventually held comfortably.

By the fifth game, Raonic was showcasing a variety of forehand winners plus a surprisingly deft drop volley, and his returns of serve opened up a chance to break in the sixth. Murray survived four deuces and a break point: His own serving was proving to be very secure, too. It needed to be, as Raonic was taking on an aggressive position, far closer to the baseline than in the past.

For his part, Raonic also needed to keep his first serves coming, particularly against one of the best returners and counterpunchers in the game. Serving at 4-4, though, he missed every first serve, and once the two men were into rally mode, Murray was the superior player. He broke to love and served out the set, 6-4, having made just three unforced errors.

But Murray had made fewer winners, too, and that would become increasingly relevant. Murray once again faced just one break point mid-set but dealt with it calmly—confident that once rallies opened up, he was in control. However Raonic persisted with his attacking game, ventured to the net, sometimes well, sometimes not so well, but it pressured Murray. And once the Raonic forehand began to find its range, he had Murray in trouble serving at 5-6.

The Canadian picked up a drop shot and showed nimble footwork for a reflex volley winner: 0-40. More good touch on a cross-court backhand winner and Raonic levelled the match, 7-5. Again Murray’s figures looked the more conservative—but it was the net stats that stood out: Murray made only 2/3 volleys compared with 11/12 from the Canadian.

Murray responded strongly at the start of the third and was beginning to pick up the Raonic serve to get into longer rallies. His defence was outstanding at times, and his sliced returns drew a sequence of errors from Raonic for a quick break. But just when he looked in command, he made four errors in a row to concede a shock break back to love.

Raonic persisted with his attacking ways, serve and volleying, and making his own sliced backhand passing shots—and it was starting to get to Murray. The Briton opened the sixth game with a double fault, could not keep the angled corner-to-corner hits of Raonic under control, and was broken again.

Raonic even worked a match-point on Murray’s serve but could not convert it. No problem: He served out the match just as he had started it. Two 140mph aces were followed by a kick second serve, and a winning forehand sealed game, set and match to love.

It was an impressive performance by the youngest man in the last 16, and rewarded the persistence and aggression of Raonic’s tactics as well as his precise power. He had won 27 points out of 33 net plays—not bad for a man whose big frame has never been the most light-footed.

It earned the Canadian a fascinating quarter-final match against one of the most fleet-footed and unpredictable players on the tour, Alexandr Dolgopolov.

The 25-year-old Dolgopolov, a former No13 but seeded 28 after a year troubled by injury and illness, continued to produce the resurgent form that beat top seed and three-time champion Nadal. He knocked out No13 seed Fabio Fognini, 6-2, 6-4, in just 76 minutes to notch up his fifth win over a top-20 player this year.