Indian Wells 2014: Novak Djokovic comes from a set down to beat Marin Cilic and reach the quarter-finals 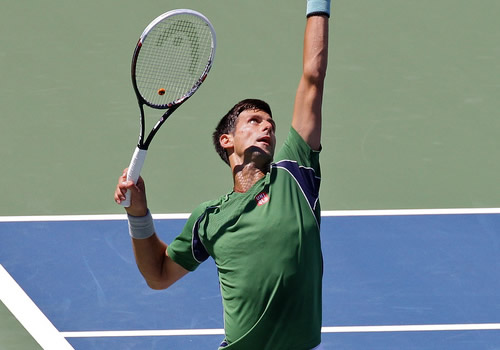 Novak Djokovic is through to the last eight Photo: Marianne Bevis

He may be the only remaining top-five player left standing in Indian Wells, but the No2 seed and two-time former champion Novak Djokovic almost didn’t make his date for a seventh quarter-final appearance here.

He was set to play the only remaining seed in his quarter, the No24-ranked Marin Cilic, and the outcome was never going to be a foregone conclusion. Cilic was proving to be one of the form players of the season so far, and the first to score 20 wins in 2014 with his speedy win over No16 seed Tommy Robredo.

Inspired by new coach Goran Ivanisevic, the 6ft 6in Cilic already had two titles from Zagreb and Delray Beach sandwiched by the final in Rotterdam, to take him from a ranking low of 47 at the end of last year. Conversely, Djokovic was yet to find his best form—though even his sub-par form is a fearsome place.

The Serb’s path had not been especially daunting as all the heavy-weight names in his section fell away, but both his unseeded opponents put up strong resistance, especially Alejandro Gonzalez in the third round. The 25-year-old world number 91 from Colombia took the Serb to three sets, 6-1, 3-6, 6-1, and Cilic did just the same.

It perhaps didn’t help matters that the match, scheduled last on Centre Court, was delayed still further by a long quarter-final between fellow Serb Jelena Jankovic and fellow No2 seed Agnieszka Radwanska.

Whatever the reason, Djokovic looked in danger of following fellow favourites to the exit door when he scored only three points on the Cilic serve in the first set and only 13 points from a total of 41, to lose the first set, 6-1.

His cause was not helped by an uncharacteristically low first-serve percentage. Before the match, he topped the tournament with 78 percent: In the cool desert conditions, he was managing little more than 50. Fortunately for him, the Cilic level dropped in the second set, giving Djokovic a better look on the Croat’s second serve, and he broke twice to level the match, 6-2.

By the third set, Djokovic began to look more like the No2 seed, breaking straight away and not allowing Cilic a single break-back chance. He served out the match, 6-3, and afterwards insisted that he did not doubt his ability to come back from his deficit:

“I was composed and mentally calm, regardless of the score line. I just accepted the fact that he came out of the blocks better than I did. He was very aggressive, not missing at all, serving incredibly fast and accurate. I couldn’t do much really.

“I believed that I could come back. The second set was a whole new story. I reset myself and told myself it was the start of the match. I forgot about the first set and the second and third went really well. It was the intensity I want to have and I hope to keep it up.”

With just Djokovic in the bottom half and Roger Federer in the top the only surviving men from the top 10 ranked players on the tour, Djokovic talked of the fresh names making their move:

“You have to accept the fact that everybody’s improving. They all want to get better and win against you as a top player. That’s another reason to train hard, to get yourself better and compete with these guys. It’s hard at the moment for any top player to stay up there. I’m aware of what’s going on. On a positive note, it’s good for the sport, to have different faces winning major tournaments.”

American No12 seed John Isner and a resurgent No22, Ernests Gulbis, both had three-set wins to set up a fascinating quarter-final in the top section of Djokovic’s half of the draw.

Two years ago, Isner finished runner-up to Federer in this tournament, and has thus far won 35 of his 36 service games.

Gulbis, maturing into his prodigious talent in the last year or so, showed flashes of his old self when various disturbances took him almost to match-losing boiling point. He led Roberto Bautista Agut by a set and a break, but had to work hard to get things back under control after the Spaniard took the second set, 6-4. Gulbis finally took the win, 6-2, after almost two-and-a-half hours.

Indian Wells 2014: The Dog has his day—Dolgopolov into 1st Masters SF