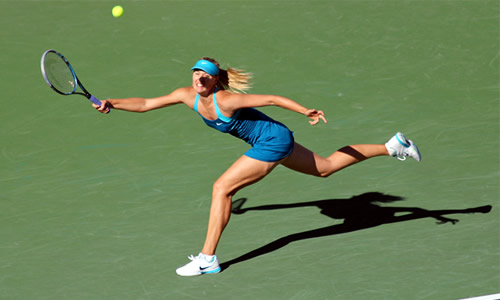 There is no denying that Indian Wells is special. It’s big, it’s beautiful, it’s star-studded, and it is the first stage of one of the toughest challenges in tennis.

Along with its sister tournament across the North American continent, the Sony Open in Miami, Indian Wells fills the whole of March in an arduous climax to the hard-court season before the clay and grass swings have their day.

What makes this—and Miami—especially gruelling is that the draws are second only in size to the Majors, comprising 96 men and women, each with a full complement of 32 seeds. With a bye to the second round, they at least have only to play six matches if they want to win the ultimate prize. For the unseeded, the task is bigger still: seven matches, just as in a Grand Slam.

Little wonder, then, that only two women have ever won both Indian Wells and Miami back-to-back: Kim Clijsters and Steffi Graf. Indeed so tough is the task of winning this tournament that only one woman has defended the singles title—another giant of the women’s game, Martina Navratilova.

For the best of the best, however, the rewards are unparalleled: The winner will claim a $1 million prize from the biggest WTA Premier purse on the tour.

But what makes Indian Wells so popular—and it has four times been voted the WTA’s favourite Premier event—is surely the experience.

The mountain-bordered, flower-filled, palm-tree-fringed Tennis Garden owns the second largest tennis stadium on the tour: Only the US Open’s Arthur Ashe holds more than its 16,600. And this year, it also debuts a near-identical smaller sibling that will hold a further 8,000—and is already impressing players and media alike.

Also new this year is the name that tops the seedings. For the first time in her career, the 32-year-old Li Na will be the top seed at a Premier Mandatory event after reaching a new high of No2 in the WTA rankings.

What is not new is the absence of the biggest name in the game, Serena Williams: She and sister Venus have boycotted the event since they were heckled here in 2001.

Missing from the main draw: Both Williams sisters would have been seeded, as would two other absentees, Jamie Hampton, who is still carrying a hip injury, and Maria Kirilenko, out with continuing knee problems. Also missing the main draw due to injury are Briton Laura Robson and Polona Hercog.

Li’s win in Australia this year was one of the most popular in years: a triumph of hard work and self belief that banished memories of her final loss last year and took her to a career-high No2—at the age of 32.

She is still the only woman this season with two titles to her name, but if she is to win her first Indian Wells title—and her best result here is a semi finish in 2007—she will have to hit the ground running after a shaky post-Australian run in Doha.

Compatriot Zheng Jie could be her first opponent but then comes one of the form players of the year so far, Klara Zakopalova, who not only won in Florianopolis last week but has also been a finalist in Rio and Hobart. What’s more, their two meetings last year both went to three sets.

Li’s fourth round is just as tough, putting either debut Premier titlist in Paris, Anastasia Pavlyuchenkova, or the always-dangerous Sabine Lisicki in the Chinese star’s path. As for the quarters, the other half of this top section contains Petra Kvitova—though on her 2014 form, it’s possible that two-time finalist Svetlana Kuznetsova could knock her out. The alternative is another woman enjoying a career-high ranking of No11, Dominika Cibulkova, who happened to face Li in the Australian final. This small bundle of energy from Slovakia also won in Acapulco last week.

It is, then, a form-packed quarter, but Li is a tougher, fitter and more confident player since working with Carlos Rodriguez and should rise to the occasion. If she does, it could set an intriguing semi against Maria Sharapova. They have split their last eight matches but have met only on Stuttgart’s clay since Li’s victory over Sharapova in Australia last year.

This will be the defending champion’s first tournament since her semi exit to Pavlyuchenkova in Paris. The Russian spent most of February on duty at the Winter Olympics in her Sochi—though she presumably spent plenty of time behind the scenes in training for a points-rich March.

For Sharapova has a lot of points to defend at both Indian Wells and Miami, where she was finalist last year, and she will not want to slip further in the rankings: She is already outside the top four at No5.

If she negotiates a couple of unpredictable openers—the unseeded Julia Goerges and Andrea Petkovic join No25 seed Sorana Cirstea in this segment—Sharapova should make a run to the quarters. That is always supposing her troublesome shoulder is back in good shape.

The fourth round should throw up Flavia Pennetta or Sam Stosur, who Sharapova has beaten in 12 of 14 meetings.

The bottom section of this quarter is headed by No5 seed Angelique Kerber, who reached the final in Doha last month but lost against her potential fourth-round opponent here, Ana Ivanovic, in the first round in Dubai. Kerber also has, before that, a possible meet with one of the fastest risers this year, the tall 20-year-old Garbine Muguruza, who won in Hobart, made a fourth-round run in Melbourne and reached the final in Florianopolis. She is on a 17-4 win-loss streak and certainly one to watch for an upset.

The 2008 champion, Ivanovic, has a dangerous young seed at the fourth-round stage, too. Sloane Stephens is also 20 and a fourth-rounder in Melbourne but has struggled with form coming into Indian Wells. However, the American has begun working with new coach Paul Annacone, so may be ready for a run here.

The form of Azarenka in Indian Wells has also been strong in the past. She was champion in 2012, reached the semis in 2009 and was a quarter-finalist last year before injury forced her to withdraw. And unlike Sharapova, she has relatively few points to defend, since she could not play last year’s Miami either.

Azarenka, then, has won her last nine matches here, and her last 12 completed matches, so should be aiming for a move up from her current No4 in the rankings—and along the way reach 400 match-wins (she is on 398).

After a strong start to the year, she has not played since her Australian Open quarter-final, as another foot injury forced her to pull out of Doha and Dubai. However if she is back to fitness, her eighth should not pose too many problems: former champion Hantuchova is the first seed, then either Roberta Vinci or Kirsten Flipkens—though Tsvetana Pironkova is a dangerous unseeded alternative here.

The other eighth is topped by a woman enjoying top-10 status for the first time, the Doha titlist Simona Halep. However she too was forced to retire in Dubai with an Achilles problem. If she’s fit, expect to see her building on her career-changing 2013 season—though the fast-improving youngster Eugenie Bouchard is a possible fourth-round danger if she negotiates Zvonareva or Peng Shuai in her first match.

Indeed Bouchard could be a challenge for anyone in the quarter if she produces her Australian semi form. A first meeting between the Canadian and Halep promises to be one of the treats of the draw.

It’s hard to predict just how far the No2 seed can advance in Indian Wells. Often a quarter-finalist, she has reached the semis only once, and has also had fluctuating fortunes this season.

She fought off tough opponents to reach the semis in Melbourne and Doha before losing respectively to the two women surging up the rankings, Cibulkova and Halep. She was also a surprise loser in the first round of Dubai to No22 Flavia Pennetta.

In her favour here this year, she has escaped many of the big hitters ahead of quarters: The other three seeds, in order, are Elena Vesnina, and Carla Suarez Navarro or Alize Cornet.

First, Radwanska will have to make sure her opening match does not catch her out, as she will face one of two talented young women keen to make an impression and who will fancy their chances: One is the youngest here, Swiss No146, 16-year-old Belinda Bencic, and the other is qualifying Brit, Heather Watson, who has been working her way back from 12 months of illness and injury.

Looking to the quarters, Radwanska could face one of two former champions: Jelena Jankovic (2010) or Caroline Wozniacki (2011).

Jankovic, No1 six years ago, is enjoying a real revival that has taken her back to No8 in the rankings. She has always been evenly matched with Wozniacki but they have not played since the summer of 2012. This will be another contest to catch—as will the resulting quarter against Radwanska.