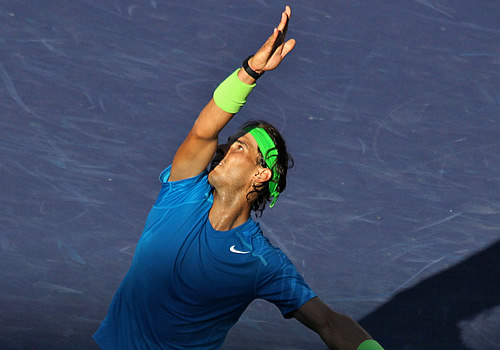 The jewels in tennis’s ATP calendar, its nine Masters events, have arrived and, as if to celebrate, March is given over entirely to two of them: the back-to-back sun-drenched Indian Wells and Miami.

These are the last hard court events before spring ushers in the clay, and they draw the biggest crowds and prizes outside the Majors. The first of them, indeed, is regarded as the ‘fifth Grand Slam’.

The Indian Wells Tennis Garden, which hosts this prestigious two-week event, boasts the second largest show court of any on the tour—only the US Open’s Arthur Ashe is bigger—and this year, it also debuts a near-identical 8,000-seater.

The Indian Wells draw also falls only a little short of New York, with 96 players, 32 seeds, and seven rounds—six for the seeds—for those who make to the final.

No surprise, then, that nowhere else can compete in prize money. The BNP Paribas Open has the biggest purse on the tour aside from the Majors and the biggest winner’s prize: $1 million.

But all the eye-watering stats in the world cannot do justice to the setting of the Tennis Garden, which is set like a sapphire in the Californian desert, and echoes the colours of its watery origins.

It overflows with flowers, trees, and fountains, and its violet courts, set in their grass-green surroundings, are set off by the backdrop of the purple peaks of the distant Santa Rosa mountains.

As always, the stars are out in force, not just in singles but in doubles. An impressive 25 of the 32 seeds have opted into both draws with only No1 Rafael Nadal and No4 Tomas Berdych of the top 14 missing. And few will want to miss the first match since 2012 of Swiss duo and Olympic gold medallists, Roger Federer and Stanislas Wawrinka.

It will, though, be the big singles contests that crank up the excitement, for much has changed since the last Masters of 2013.

Nadal claimed the year-end No1 in a startling come-back season of 10 titles, and despite back trouble in the final of the Australian Open this January, he already has two titles this year.

Big names have joined big names—Boris Becker with Novak Djokovic, Michael Chang with Kei Nishikori, Stefan Edberg with Federer, Goran Ivanisevic with Marin Cilic—and certainly in the case of the latter pairings, a surge of form has followed.

For the first time since Juan Martin del Potro lifted the US Open trophy in 2009, a player outside “the big four” won a Grand Slam, taking Wawrinka to a career-high No3 in the rankings and, for the first time in their mature careers, past compatriot Federer, who fell to his lowest ranking, No8, in more than 11 years.

There have been injuries—Andy Murray left the tour for back surgery, Del Potro continues to struggle with a wrist injury, and David Ferrer, who began 2014 at a career-high No3 at the age of 31, will be a rare injury absentee this week.

And new challengers have already flexed their muscles this season: old campaigners like Tomas Berdych—also at a career-high—is enjoying his best ever start to a year, not least with back-to-back 500 runs to the Rotterdam title and Dubai final. And elsewhere, the long promise of Grigor Dimitrov has come good with his first 500 title in Acapulco.

So Indian Wells brings uncertainty and excitement in equal measure. Will one of the old familiar faces win again—and in 12 of the past 13 years, a top-five man has triumphed—or will a new man throw down the gauntlet?

Notable run: Hewitt is two matches short of his 600th win—and Nadal and Federer are the only active players to have reached that milestone.

Defending champion Nadal is aiming to equal Federer’s four titles in the desert and extend his record on the all-time Masters list to 27. But to do so, he will have to negotiate perhaps the toughest quarter and the more loaded half of the draw.

That he comes to Indian Wells from a title run on Rio’s clay is of little concern—he won here after a successful clay swing last year, too—but he has tests from the word go. He’ll start with the winner between Radek Stepanek and Denis Istomin and then could face a rematch of the Rio final with Alexandr Dolgopolov, who also reached the Acapulco semis over some big-hitting hard-court exponents.

In the fourth round, Nadal is likely to meet Gael Monfils, whose hard-court credentials should outweigh the clay expertise of Fabio Fognini in what will be a hugely entertaining Round 3 encounter. Nadal met the resurgent Monfils both in Doha and the Australian Open—the latter a much easier win for the Spaniard than the former.

And so to the quarters, and a much-anticipated meeting with No5 seed Murray, because they have not met since Tokyo in 2011. Since then, Murray has won his first Grand Slam, Olympic gold and the Wimbledon title, and with his back now pain free, he is set to build on his 2014 come-back—especially as he thrives in the heat and on hard-courts.

However, Murray’s mini-section may be the toughest of all: Lukas Rosol can famously turn on the power, Igor Sijsling made an impressive run in Rotterdam with some rhythm-breaking serve-and-volley tennis, and Murray was taken to three sets in Acapulco by his first seed, Pablo Andujar. The Spaniard also had match points against Nadal in a third tie-break set in Rio.

Come the fourth round, and Murray is likely to face the winner of an intriguing first meet between huge-hitting Milos Raonic or Jerzy Janowicz, both of whom have beaten Murray in the past, though both have had to contend with injuries.

It’s a big ask for the Briton then to take on Nadal, and for the winner then to beat either the Australian champion Wawrinka or Federer just to get to a possible final against Djokovic.

The bottom quarter of Nadal’s half is just as tricky and just as unpredictable, ending in potentially the most intriguing quarter-final of the tournament between Swiss mates Federer and Wawrinka.

What makes it fascinating is the switch in power since they last met at this event last year. Both then and in the previous match in Shanghai, Wawrinka came close to stealing his compatriot’s thunder, though his only win in 14 matches came five years ago. But Wawrinka was already on the march up the rankings and taking other top-10 players in his stride a year ago, and it will be a confident No3 seed who takes on the No7 in his first match since becoming a Grand Slam champion.

Wawrinka may have to negotiate the ace-delivering Ivo Karlovic but should have little problem against his first seed, Andreas Seppi. The fourth round will produce Kevin Anderson or Mikhail Youzhny—though an unseeded Hewitt is here, too. The more likely opponent, fresh from back-to-back finals in Delray Beach and Acapulco, is Anderson.

As for Federer, it was here last year that his injury troubles began, and his injured back affected his game for the next six months. But he has looked in increasingly good shape this season, especially in beating Djokovic and Berdych to take the Dubai title, and should make the fourth round via Paul-Henri Mathieu and Dmitry Tursunov.

He is then scheduled to play the winner between Nishikori and Tommy Haas—who has been contending with shoulder problems. The former beat him in Madrid last year, while Haas had him at a set down in Halle.

And so to Wawrinka, who may be a touch rusty with no match-play since Australia, though by the quarters, he should be finding his form.

Berdych may be the No4 seed here, but it’s worth remembering that his only Masters title came almost a decade ago in Paris—and he has since reached only two Masters finals. But Berdych has been a slow and steady improver, a former Wimbledon finalist, with numerous victories over the elite in the game—though he has to go back to 2006 to see a win over Nadal.

In Australia this year, he completed his set of Grand Slam semis—he even came very close to beating eventual champion Wawrinka—and took the Rotterdam title before reaching the Dubai final, where he led Federer by a set and a break.

He is now on a 16-3 run and it’s hard to see him falling short of the fourth round. A benign draw has thrown No8 Richard Gasquet into his quarter rather than Federer, Murray or Del Potro. His first seed, Florian Mayer, does have some form but should not prove an obstacle. His next hurdle, though, could pose the toughest of the quarter, a meet with the winner of one of the show-stoppers of the tournament between Grigor Dimitrov and Ernests Gulbis

These two hugely talented young players have both come into hot form this year to hit career-high rankings inside the top 20 and win a title apiece. To add some spice to their contest, they have split matches in Rotterdam and Acapulco already, with the latter taking two and three-quarter hours to decide.

Dimitrov may be physically weary after three arduous matches in a row immediately before his trip to the desert—and Gulbis would relish the chance to avenge his Rotterdam loss to Berdych.

Berdych will be hoping to improve on his sole Indian Wells semi finish in 2013, and should be confident about his chances against possible quarter-finalists Gasquet—who he beat here last year—and John Isner, the 2012 finalist.

Del Potro may be the No6 seed and a formidable prospect for Djokovic—witness their marathon contest at Wimbledon last year and the Argentine’s victory over the Serb in three sets here last year—but there is a huge question mark over the Del Potro form.

His left wrist has been of growing concern since his second round loss at the Australian Open, he was still in pain during Rotterdam, and had to retire in Dubai, where he was unable to comment on his future prospects.

With final points to defend, he is not helped by the draw, with Feliciano Lopez and then possibly one of the new stars to emerge last year, Vasek Pospisil, who should suit these courts perfectly if his own back injuries are fully resolved.

Come the fourth round, there could be an even newer name in the frame: Dominic Thiem made a name for himself in Rotterdam and may upset No21 seed Gilles Simon. But expect Jo-Wilfried Tsonga to advance possibly all the way to the quarters if Del Potro fails.

There is one man who could upset Djokovic’s progress through an otherwise straightforward segment. The fourth round looks likely to throw him the in-form Cilic who has won two titles from three finals, beating Murray and Tsonga in Rotterdam. The Croat has been like a man reborn, though he has yet to beat Djokovic in seven meetings.