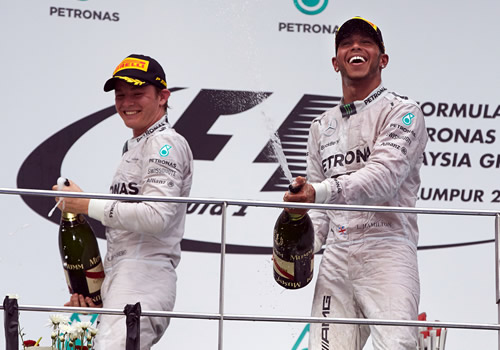 The 29-year-old led from pole to flag and won his 23rd career grand prix ahead of team-mate Nico Rosberg and Red Bull’s Sebastian Vettel at Sepang.

It’s all down to the team. The car was just spectacular this weekend

“I’m incredibly happy,” said Hamilton. “This is my first win in Malaysia after eight attempts and to do it for our Petronas family in their home country makes it even more special.

“It’s all down to the team. They have done a fantastic job and I have to say a huge thank you to everyone here at the track and back at our factories who have been pushing non-stop to get the car where it is. The car was just spectacular this weekend.”

Hamilton took the chequered flag with an advantage of 17 seconds and set the fastest lap of the race on lap 52 as he secured Mercedes’ 15th F1 victory.

“The race was tougher than it perhaps looked today and the conditions here always make it a great challenge,” he continued.

“But I was able to look after the car, the tyres and the fuel and still keep a bit of pace in hand which made my job that little bit easier.

“It’s great to see Mercedes leading the championship but we know that we have to make these early races pay.

“Anything can happen as we saw in Australia, so this is an important result for us. One-two finishes don´t happen very often and this is a real achievement for the team.”