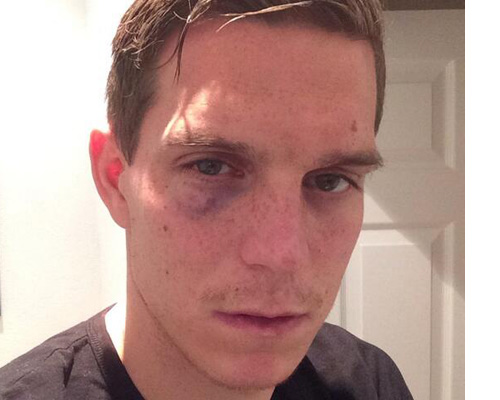 Simon Mignolet has jokingly apologised to Daniel Agger’s wife after the Liverpool goalkeeper gave the centre-half a black eye during their 3-0 win at Old Trafford.

The Belgium international attempted to clear a United corner but was beaten to the ball by Nemanja Vidic and clattered his team-mate Agger, who was marking the Serbian.

The 29-year-old Dane, who was made Reds vice-captain last summer, took to his Twitter following the memorable victory in the north-west derby sporting a heavily bruised right eye.

Mignolet, who suffered a fractured eye socket and broken nose during his spell with former club Sunderland, responded on the social media site with an apology to Agger’s wife.

@DanielAgger My sincere apologies also to the wife! :)

Liverpool moved to within four points of leaders Chelsea after Steven Gerrard scored either side of half-time and Luis Suarez scored his 25th goal of the season in the 84th minute at Old Trafford.