Malaysian Grand Prix 2014: Mercedes' Lewis Hamilton is looking to bouncing back from the disappointment of retiring in Australia 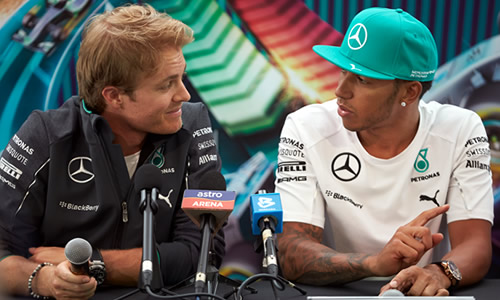 Lewis Hamilton was forced to retire from the season-opening Australian Grand Prix but the feeling of failure has spurred the Brit to do even better in Malaysia.

“It would be amazing to stand on the top step at one of our home races and I´m looking forward to bouncing back after a tough weekend in Australia,” said Hamilton.

“Although it was not the result we were hoping for, every setback is a chance to learn more about this new car, which is important as they´re incredibly complex machines. I know the team at Brackley and Brixworth is pushing harder than ever and I´ll be doing the same.”

“Malaysia is a stunning country and I always enjoy coming here. The fans are fantastic and it also forms one of three home races for the team alongside Germany and Great Britain.”

The Sepang International Circuit, Kuala Lumpur, holds some good memories for Hamilton but he remembers too well the testing conditions he has faced.

“I finished second on my Formula 1 debut here in 2007 and have been on the podium at the last two Malaysian Grand Prix’s but I´ve yet to win here,” he said.

Every setback is a chance to learn more about this new car, which is important

The 2008 world champion added: “During my first race here in 2007 I didn´t have a drinks feed available during the race, so by the end I was totally exhausted and had lost about four kilos in weight! As a driver it´s a weekend you have to be well prepared for physically, as it can be very easy to lose concentration towards the end of a long race in these conditions.”

Malaysia is another of Nico Rosberg’s favourites and after winning the Australian Grand Prix and celebrating his fourth F1 victory, the German is looking forward to continuing his run of form at the Sepang International Circuit.

Rosberg said: “Straight after one of my personal favourites at Albert Park, Sepang is another circuit that I really enjoy. The circuit holds some great memories for me too as I achieved my first podium for Mercedes here at the start of the 2010 season.

“Australia was the perfect start to my season, but it also highlighted that we´re not 100 per cent there yet in terms of reliability. We´ve had two weeks before this race to identify all the things that we can do better, so hopefully we can bring both cars home for a good result this weekend and continue our strong start to the year.”

Like Hamilton, Rosberg knows the weather will have a big influence during the race weekend but it is a challenge the German is prepared for.

“This is one of the things we have to train for over the winter: ensuring that we can cope with these conditions both physically and mentally right up to the chequered flag,” said Rosberg.

“The weather is always a factor through the weekend, with big chances of a monsoon arriving at least once per day. In the past few years this has usually happened in either qualifying or the race. It mixes things up nicely and makes for exciting racing, which is great fun on track and also for the fans watching at the circuit or at home.”

The German added: “The conditions this weekend will also be much hotter than in Australia so it will be a good opportunity to see how the cars perform in such a different climate.”