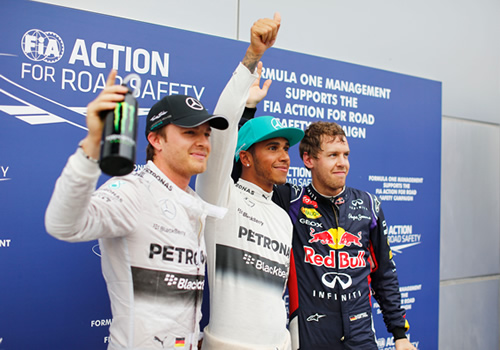 I had to bail out of my final fast lap, so it was very close

Hamilton, whose pole position was the 33rd of his career, was delighted to clinch first place in such testing conditions.

“I’m all over the place at the moment,” said Hamilton. “I’m really happy with how well we’ve done over the weekend, but today was incredible – how heavy was the rain?

“It was tricky out there for everyone because at the end it was almost impossible to see.

“I couldn’t see where the track went, where the corners were, where to brake. I had to bail out of my final fast lap, so it was very close.”

Hamilton, who was forced to retire from the season-opening Australian Grand Prix earlier in the month, is determined to make amends at Sepang.

“For myself and for the team, the priority is to bag as many points as possible,” he continued.

“We’ve got great a great opportunity, a great car and a team that is performing fantastically right now. Fingers crossed we can see ourselves through to the finish line.”

Meanwhile, Red Bull’s Vettel insisted that he was pleased with his performance.

“It was very close, too close,” said Vettel. “I should be on the good side for tomorrow but it depends on how good the start is. I’m happy with the result.”