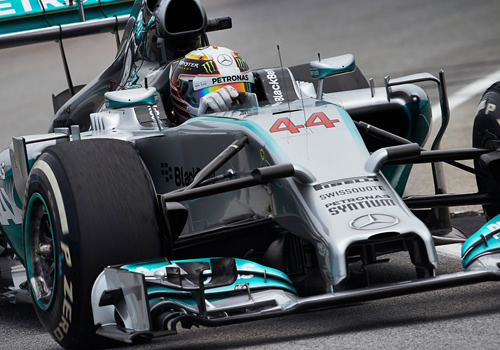 Lewis Hamilton reflected on an “incredible” race after winning the Malaysian Grand Prix ahead of his Mercedes team-mate Nico Rosberg.

The Briton led from pole to flag as he dominated the second grand prix of the season, finishing 17 seconds ahead of Rosberg.

Hamilton, 29, dedicated his victory to the families of the passengers lost in the disappearance of flight MH370

“That was just incredible after such a difficult weekend and a long winter,” said Hamilton.

“I just feel so grateful, particularly after the tragedy three weeks and I would like to dedicate the win to the families.

“Today you are sweating before you even got in the car so you just have try to keep cool and keep your focus.

“But the team were absolutely spot on with all their instructions today so big thanks to them.”

Rosberg, who won the season-opening Australian Grand Prix earlier this month, added: “I got a great start today, it was tough but I took it from there. I was trying to chase Lewis but he was just too quick for me today.”

“I am disappointed,” said Ricciardo. “It was looking like we could have a solid points finish and I was starting to mix it up at the front but at the last pit stop there were all the problems so the race ended pretty quickly for me.

“Deep down I am really disappointed but there is a bit in me which is happy because I have come out how I wanted to in the first two races, I want to improve but there are things to be pleased with.”

Rosberg currently tops the drivers’ standings with 43 points, ahead of Hamilton with 25 and Alonso with 24.