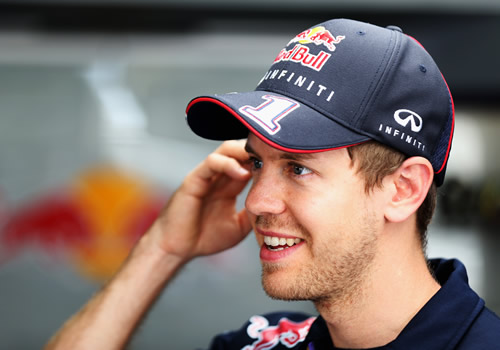 It was an unfortunate weekend in Australia for both Sebastian Vettel and Daniel Ricciardo.

Vettel was hampered by power problems and had to retire, while his Red Bull team-mate Ricciardo finished valiantly in second, only to be disqualified for breaching fuel consumption rules.

Despite his misfortunes, Vettel was encouraged by how competitive the RB10 was and hopes for a positive outcome at this weekend’s Malaysian Grand Prix.

“We still have a lot of work to do with the car but it was encouraging to see that our pace was better than expected in Australia – hopefully we can build on that and start collecting some strong points in the next two races,” said Vettel.

Vettel, winner of the Laureus sportsman of the year award, continued: “Looking to the track, the two overtaking possibilities are the first corner and before the last corner, which in both cases is after a long straight; my favourite corners are five and six.

“Beside the challenge of the circuit, you have to cope with the tropical heat. We can be driving in humidity of up to 90 per cent, while big thunderstorms in the afternoon are not uncommon.

Ignoring the end result in Australia, Ricciardo had an exceptional race – and the 24-year-old is hoping he can bring a similar performance with him to Sepang.

“Despite the eventual outcome in Melbourne, I still feel really good about my performance in the race and throughout the weekend,” said Ricciard.

“Obviously it would be nice to get the 18 points, but I’m happy that I still stood on the podium and that was a great feeling. I know I did a good job and I can take that with me to the next race in Malaysia.”

The Australian is no stranger to the demands of the Sepang International Circuit and knows that preparation is key.

“One thing you have to take into account there is the heat,” he said. “I first drove at Sepang when I was 16 in a four-day Formula BMW test and you couldn’t really say I was prepared for it!

“Until you’ve experienced the heat in the cockpit, it isn’t something you can fully appreciate, no matter what people tell you. I was drinking six litres of fluid a day and I still suffered. It’s something you prepare for better as you come back again and again, though it’s still one of the most physically-challenging races.”

“If you’re not correctly prepared then the last 20 laps of a grand prix will be difficult and the physicality of the race can hit your concentration in those latter stages. And so you train, train and train.”