Andy Murray, Roger Federer and Kei Nishikori are all through to the fourth round of the Miami Masters 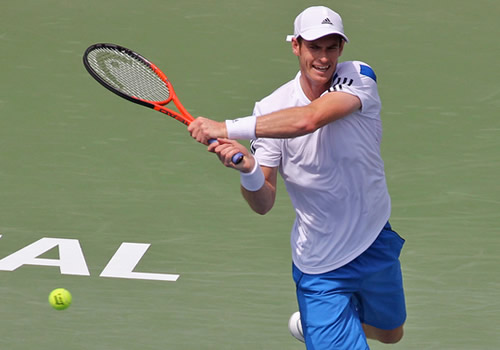 Billed as Super Sunday, this packed day in Miami was hot, humid and high on adrenalin as the third round of the men’s draw got under way under bright blue skies.

And the questions rolled in with the wind like waves onto the Miami’s famous South Beach.

Did Crandon Park have enough ice collars to give relief to the players who poured with perspiration in 31C heat and over 70 percent humidity?

With the top seed in the bottom half, Novak Djokovic, advancing to Round 4 without lifting a racket—his opponent Florian Mayer withdrew injured—was there even the slightest chance that the next three seeds would fail to join him?

No4 David Ferrer, No5 Roger Federer and No6 Andy Murray all played men who had never beaten them. Indeed in a combined total of 15 matches, they had conceded a tally of just two sets. It did not look hopeful for, respectively, Andreas Seppi, Thiemo de Bakker or Feliciano Lopez.

Against an exuberant Marcos Baghdatis, how many lives did Jo-Wilfried Tsonga have? He lost the opening set. He went 5-1 down in the second set tie-breaker. He faced and survived five break points in the third set, and ended the match with six fewer points out the 216 than his opponent. Yet he advanced, 4-6, 7-6, 7-5.

Was there room on Lopez’s back for any more supporting tape and, with such a handicap, could his serve-and-volley tennis make inroads on these slow, violet courts?

More important, why was Ivan Lendl sitting—and laughing—in the front row of Murray’s player’s box after the two announced their surprise split so publicly here just a few days ago? Perhaps it had something to do with his former charge’s scintillating form in demolishing the hapless Spaniard, 6-4, 6-1, in 73 minutes, winning more than 60 percent of the points.

Could Federer come close to the record serving performance he produced in his opening match, where he lost only three points on serve to beat Ivo Karlovic? Well that all depends on the definition of close: Federer dropped seven points on serve this time, but won the match 11 minutes faster. He took 63 minutes, faced no break points and tied it up, 6-3, 6-3, also winning 60 percent of the points.

How many more of the six over-30s in this half would make it to the fourth round? By the time 32-year-old Federer was safely in the locker room, 31-year-old Tommy Robredo was back at his hotel, having raced by the 32-year-old Julien Benneteau, 6-3, 6-4—but now would have to take on the younger and well rested, Djokovic.

But there was one more big question that would only be answered by the conclusion of the match between two much younger talented men who both threaten to become top-10 players.

Separated by just 18 months, the 24-year-old Kei Nishikori, ranked 21, would take on 22-year-old Grigor Dimitrov, ranked 16, for a fourth-round place. Would the Japanese man notch up his 150th match-win, or would the Bulgarian win his 100th?

Niskikori had won their only previous meeting, in Shanghai last October, but since then, Dimitrov had begun to tick off the kind of landmarks that he had promised to do since scoring his first-ever tour-level win five years ago in Rotterdam, where he beat Tomas Berdych, 4-6, 6-3, 6-4, before losing to Rafael Nadal in another three-setter.

Earlier this year, Dimitrov cracked the top 20 for the first time, reached a maiden Grand Slam quarter-final at the Australian Open, and took his second career title—his first at the 500 level—in Acapulco.

That said, Nishikori was a former No11 before he was knocked back by injury, but had scored his fourth career title in Memphis in February.

Who would answer the call to a new milestone?

The first set was a near flawless display from both men: all-court, fast-paced, packed with winners and style. No wonder the Grandstand stadium was packed as the sun set over Miami.

Not until Nishikori served at 5-6 did he face a break point, and then saved the game with three aces: Impressive from a man of 5ft 10in.

Not until the first point of the tie-break did Dimitrov hit a double fault, but then hit another to go 0-4 down. It was the first wayward game of the set, and all the errors seemed to come from Dimitrov. Nishikori took the set, 7-1.

The second set began at the same high-tempo, high-quality level. The hitting was fast, deep, angled and clean. It even had off-court drama, as Dimitrov supported a fainting ball-girl from court, laid her down and instructed staff on how to treat her.

It distracted neither man: If anything, the stakes, and the pace, seemed to rise. A stunning Dimitrov backhand down the line was followed by a drifting, cross-court winner from Nishikori. Both had to play well, neither could afford to blink.

Dimitrov almost did blink over an adverse line call when serving to save the match at 4-5, but regrouped strongly. However just when it looked certain to go to another tie-break, Dimitrov 40-0 up at 5-6, he missed a couple of lines, double faulted, and in the blink of an eye, the game and match slipped away.

It may not have been the answer that most expected before the match, nor that the majority in Grandstand wanted. But it was Nishikori who reached his 150 win and the fourth round in Miami for the third year in a row.

And mighty impressive he was too.