Miami Masters 2014: Nadal battles to semi against a booming Berdych 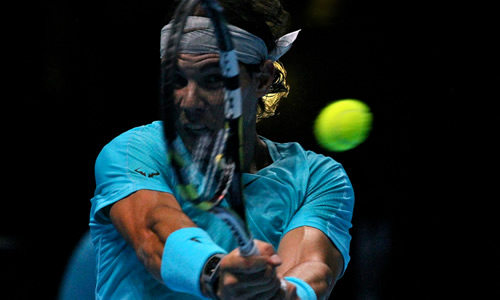 Rafael Nadal may last year have put together one of the finest comebacks from injury ever made on a tennis court: He claimed 10 titles and the No1 ranking.

The remarkable Spaniard may have shone on the hard courts just as brightly as on his beloved clay—he won all three of the North American Masters that he played and completed his run by winning the US Open.

He may be head and shoulders above every other man in the list of Masters title winners with 26 crowns, and he may have now have 270 Masters match-wins—a mere 21 behind the leader, Roger Federer.

But one Masters title has eluded him: Miami.

Not that his record in Florida has lacked lustre. His first visit to Crandon Park announced his name with a bang. Ten years ago, at just 17 years old, he met Federer for the first time, and shocked the tennis world by beating him in a scant 70 minutes, 6-3, 6-3. Their second meeting, too, was in Miami the next year—this time in the final—and again Nadal made more than a passing impression by winning the first two sets before losing in five.

In this, his 10th year at Miami, he was in his seventh consecutive quarter-final—and the 61st Masters quarter-final of his career—and was aiming to reach his fifth Miami semi-final and his fourth final.

But he had yet to win the coveted trophy.

His form ahead of his meeting with the huge-hitting young Canadian, Milos Raonic, was certainly looking top-notch, too. He had lost just nine games and was yet to be broken. And to help his cause, he had never before lost a set to Raonic in four meetings.

Raonic, too, was yet to drop a set, though his route to the quarter-final had been, on paper at least, an easier one: He was yet to play a seed. But would the cool, night conditions take some of the sting out of his biggest weapon, a serve that can regularly clock up 140mph on the speed gun?

Once again, it was Nadal who seemed in control of the match in the early stages of match. In a closely-contested opening 40 minutes, the Spaniard worked the first break points, but could not convert them, and they remained locked at 3-3.

Raonic’s first serve was firing well, and by the start of he 10th game, he had scored 21 out of 23 on first deliveries. And although Nadal’s serving percentage was the higher, it was his serve that let him down: He double-faulted on break point to concede his first set of the tournament and his first to Raonic, 6-4.

In typical style, though, Nadal was spurred to greater effort and it quickly bore fruit in the second set. He broke twice to take a 4-0 lead, and he held that advantage to level the match, 6-2.

Come the third, and Raonic immediately had to save a break point, but despite his serving level dropping to below 50 percent, he hung on until the seventh game. It is a mark of the world No1, however, that against such a big-serving adversary, his own serving hit its prime. Nadal dropped only three points on serve, broke in the seventh game, and sealed set and match, 6-4, with a love hold.

But this encounter had been both his toughest in the tournament and his toughest against Raonic—over two hours and 35 minutes—and the Canadian was satisfied that he was starting to make inroads at last:

“I feel like this time around I handled myself much better, especially considering the conditions. So a lot of things we have been working on I managed to incorporate, and I feel like I’m much further ahead. I dealt with the situation much better than I would have a few weeks ago or few months ago.”

Next, Nadal has to play another big man with a big serve and big forehand—and a man with an altogether more complete game that Raonic—Tomas Berdych, who has also been a runner-up in Miami, in 2010.

Nadal still has reason to be confident, however, for he has a 16-match winning streak against Berdych, and leads their head-to-head, 17-3. Still he was understated in his expectations:

“For me to be in semi-finals after losing early in Indian Wells is very important for my confidence. The difference between quarter-finals and semi-finals is a lot, and tomorrow I have another day to try to keep playing better.”

Berdych brought to an end the impressive run of No23 Alexandr Dolgopolov, who has surged up the rankings this season, and took out Nadal and Raonic in Indian Wells. In Miami, he was again looking impressive, beating Stan Wawrinka, but it was an increasingly weary Dolgopolov who stayed on level terms with Berdych in the first set as they exchanged breaks, but was finally broken after a short rain delay to go behind, 6-4.

He came back strongly in the second to take an early break, and as long as his first serve hit the mark, Dolgopolov remained in contention. Indeed he dropped fewer points on his first serve in the match than Berdych. But with only half of his first deliveries going in—and firing more wildly by the minute in the second set—he was punished on his weak, high-bouncing second serve by the punishing forehand of Berdych.

As the Czech grew in confidence, so did his attack, and he broke Dolgopolov to level at 5-5 and take it to a tie-breaker, where the disparity in serving was even more telling. Berdych raced to victory, 7-6(3), to reach his third Miami semi-final, score his 450th career win, and seal a place back in the top five.

“It is a big value, of course. That’s the thing why you play tennis. It’s also one of the goals that we have in tennis… It’s even more important when you are more stable, more consistent and you are able to keep it up for a longer time. The best way to end up like that is in the end of the year.”

Consistency has been the watch-word of the Czech, and this marks his 15th Masters semi-final after playing his 29th Masters quarter-final. He has now won 20 matches this year, claiming the Rotterdam title and reaching the Dubai final along the way.

But like so many other men, he has a daunting losing record against Nadal, but despite losing the last 16 matches in a row, Berdych took their last match, at the World Tour Finals, to three sets, and lost their last outdoor hard-court contest, in Cincinnati last year, by the smallest of margins, 7-5, 7-6.

Berdych is still, at 28, improving incrementally with each month to be a calmer, fitter and more confident player than at any time in his career. But as his semi-final will again be played in the cooler evening conditions, he may be destined once again to come off second best.