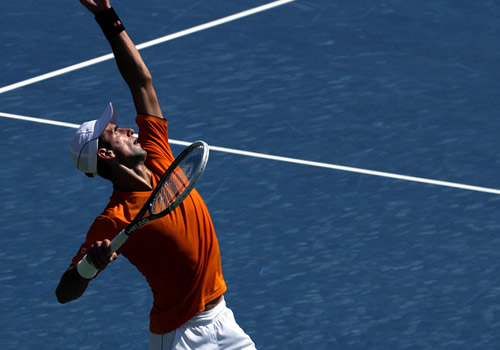 In the end, the road to the title match of the Miami Masters may have been unconventional, but there was still a certain inevitability about the combatants who faced one another come the final showdown.

For it would bring together the two top men in the world, No1 Rafael Nadal and No2 Novak Djokovic, for a 40th time in the most frequently-played rivalry of the Open era.

Their progress had been unconventional because both enjoyed an extended breather after their semi-final opponents withdrew with illness and injury. But inevitable because they had already accounted for 20 Masters titles since the start of 2011, failing to win only seven in the last three years. In fact, these two men already owned eight of the current nine Masters titles—four apiece.

As for the stakes, well both had points to gain. Nadal did not play Miami last year so had the chance to consolidate a lead of more than 2,000 points in the rankings before he began his defence of huge points in the imminent clay season. Djokovic fell in the fourth round last year so could build a valuable platform on which to build his clay ambitions, for the Serb has made no secret of two particular ambitions this year: winning the French Open and reclaiming the No1 ranking.

It was certainly not unusual to see either man in Miami’s title match: Djokovic had won it three times, Nadal had reached the final three times, beaten in his last, in 2011, by Djokovic. It was a match that encapsulated this intense, gruelling rivalry, requiring more than 200 minutes and a final set tie-break to decide. Few expected this encounter to be any different—but many were mistaken.

In the first game, a six-minute overture opened by Djokovic, the intensity of their rivalry was on full show. A long rally drew an error from the Serb for break point, but Djokovic survived. Nadal held with ease, but it was not long before Djokovic began to slot his length-perfect ground strokes to the corners, and then to find angles with his backhand that even the forehand of Nadal could not reach.

The Spaniard seemed entranced by the depth, width and penetration of his opponent’s shots. He persisted in receiving serve metres behind the baseline, putting him on the defensive far too often and leaving the court open for Djokovic to weave his magic. The Serb fired two stunning forehands in the sixth game—one catching the back edge of the baseline—to break.

Nadal never looked like breaking back and, having taken almost half an hour to reach 3-2, it took Djokovic little more than 10 minutes to serve out the rest of the set, 6-3. He had made the same number of winner and unforced errors as Nadal, but it was in the forced errors that he had wrenched control: By mid-way through the set, he had made only three to Nadal’s 10.

There were few forays to the net on either side: Djokovic made four winners in the front court from a total of 48 points in the set, but Nadal, crucially, made only one. He would have to change his tactics to break up the rhythm of the Serb if he was to get back into this match.

Nadal had the advantage of serving first in the second set, but he looked entirely flummoxed by the clean, flawless returns that Djokovic strung together. Every ball from the Serb was close the baseline and coming through the court with flat, angled precision that seemed to keep Nadal on the back foot.

I played a great match, from the start to the end everything was working really well

Djokovic took advantage of his opponent’s defensive replies to immediately break, and looked supremely calm and assured on his own serve even through a time violation warning. He took a 2-0 lead as he put together one of his most clinical performances of the year.

Much of the time, though, it looked as though Nadal was playing up-hill. He mistimed balls—a rarity from the Spaniard—and struggled to get any real penetration from the baseline, even on his famous down-the-line forehand.

He neither came to the net himself—just three times in the match—nor brought Djokovic in, and it was hard to recall a single lob or a winner past his net-based opponent. Not surprisingly, then, Djokovic stuck to the tried and tested—and increasingly successful—tactics and came in only seven times himself, played a drop shot once, and needed to lob not at all.

Nadal defended a break point in the fifth game but was soon serving at 3-5—and another shanked forehand brought up match points. With just 83 minutes on the clock—an unusually short time for a contest between these two—Djokovic had broken for set, match and title, 6-3.

Extraordinarily, then, that first break point in the first game of the match was the only one that Djokovic faced. He made not a single double fault, lost only five points on his first serve, and made only 14 unforced errors.

He was, naturally, very satisfied with how he had played:

“It’s been a fantastic tournament, a very enjoyable time as it always is in Miami. I played a great match, from the start to the end everything was working really well. It’s always a challenge and a pleasure to play against Rafa. Back in 2007 I won my first big title here in Miami and I have the greatest memories from this centre court.”

But this felt like a gauntlet being thrown down by Djokovic.

With the win, he becomes just the second player to achieve the Indian Wells-Miami sweep on two separate occasions, following in the footsteps of Roger Federer—who he beat two weeks ago in the final of Indian Wells itself.

The first time Djokovic achieved the biggest of hard-court doubles was during his record-breaking run at the start of 2011, when he was undefeated in 41 straight matches before losing in the Roland Garros semi-finals.

He now holds five of the nine Masters titles to Nadal’s four, and Miami marks his fourth in a row.

And so the tour turns its back on the hard courts until the return to North America at the end of July and turns instead to Nadal’s favourite surface, the red clay. Yet the Spaniard will be acutely aware that it was at the first clay Masters, in Monte Carlo, that Djokovic brought an end to his eight-title run last year.

So the benign, beautiful setting of the Mediterranean—at the place Djokovic these days calls home—could become the crucible in which these two men fight for dominance in the race to the French Open.