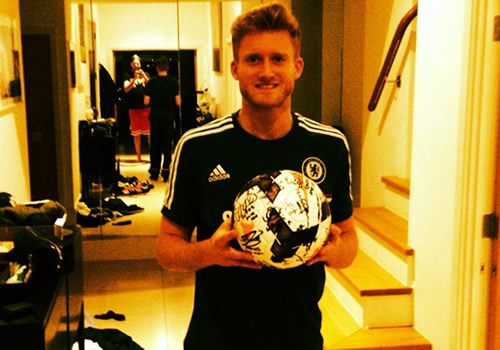 Chelsea remained four points clear at the top of the Premier League thanks to a 3-0 win over Fulham on Saturday.

Elsewhere, Newcastle secured a 4-1 win at Hull City, and Everton snatched a 1-0 victory over West Ham United at Goodison Park.

Saturday’s Premier League games prompted plenty of activity on Twitter and other social media – and here are our favourite updates.

Chelsea midfielder Andre Schürrle (@Andre_Schuerrle) celebrates his hat-hatrick by posting the photo above: “Love this ball:)) 3 important points!! Thanks for your support!! #blues #behappy ”

His Blues team-mate Oscar adds his support via Instagram after the win at Craven Cottage: “Great win and important 3 points today come on Chelsea ! Congratulations @andreschuerrle !!”

Gary Lineker (@GaryLineker) urges his followers to tune in to Match of the Day: “MOTD is worth watching tonight, if only for a piece of extreme skill from Eden Hazard. The cross of all crosses.”

Meanwhile, Hull defender Curtis Davies (@TheCurtisDavies) admits his disappointment after the loss to the Magpies: “Victims of our own downfall today! For all NUFC quality in their team they never had to work hard for their goals! On to Sunderland…#HCAFC”

And his team-mate Tom Huddlestone (@Huddz8) is not happy either: “Bad bad day at the office,felt like every time we we missed a good chance then went up the other end and scored! We need to improve all over”

And finally, Everton’s Darron Gibson (@D_gibson4) is delighted with victory over the Hammers: “Good win! Lads deserved the 3 points with the second half performance! #COYB”