PICTURE: Per Mertesacker poses in Arsenal shirt as a boy 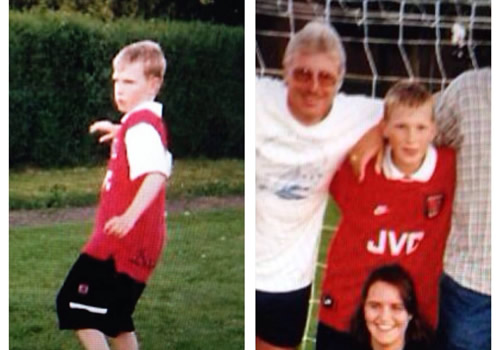 Per Mertesacker has described his delight at signing a new contract with Arsenal after revealing that his love for the north London club dates back to when he was a young boy.

The Germany international has been one of the Gunners’ standout performers this season alongside Laurent Koscielny in the heart of Arsenal’s defence.

Defender Mertesacker has penned a new deal alongside midfielder Tomas Rosicky, and the 29-year-old could not hide his delight via a message and photo posted on his official Facebook page.

Mertesacker posted a picture of himself as a young boy wearing an Arsenal shirt, and wrote: “Being the first time to England as a little boy I brought an Arsenal jersey back with me as a souvenir.

“And as you can see in the picture I was so proud wearing it when playing football with my friends.

“Many years later I became a real Gunner being even more proud to wear the Arsenal jersey.

“I am truly thankful to the club and the supporters for the time I had so far here. And today I am deeply proud to have extended my contract with Arsenal. Proud to be a gunner!”