RaboDirect Pro12: Glasgow coach Kenny Murray wants to see their warrior spirit in their bid to reach the play-offs 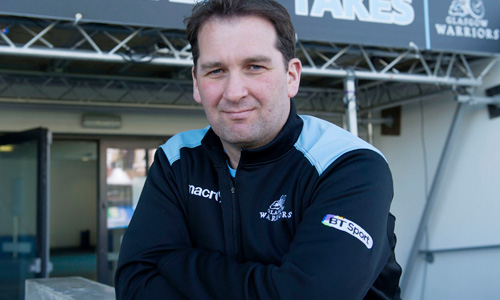 Glasgow Warriors will need to produce their warrior spirit for the rest of the season if they are to achieve their target of making the RaboDirect Pro12 play-offs, according to Kenny Murray.

The Scottish side weren’t at their best in Saturday’s 14-6 home win over the Scarlets, but are expected to face tougher tests in their season run-in with the Ospreys and Ulster visiting Scotstoun and an away trip to Limerick to face second-place Munster in the coming weeks.

We’ve put ourselves in a really good position, we’re aware we’ve got five home games left and Treviso and Munster away – if we can get a win this weekend it puts us in a really strong position

Scotland outside-half Duncan Weir picked up a broken nose for his efforts against the Scarlets and Warriors assistant coach Murray believes he epitomises the commitment they need to beat the Ospreys to a top four finish.

“He got a broken nose, but he did really well.” Murray said.

“We do an awards thing at the end of every game – ball carrier award, the tackle award or whatever. Duncan won the contact clear-out award, which is really good for stand-off to win that. He’s a brave wee guy, he’s got the true warrior spirit.

“He’s got a broken nose and he knocked down [Wales centre] Jonathan Davies really well just off a lineout – we knew they were going to play off lineouts bringing their centres flat off nine.

“That’s the kind of performance we’re going to need for the rest of the season as well.”

The Warriors defeated the Ospreys in the penultimate game of last season to help edge out the Welsh region in the race for the top four and former Ayr coach Murray admitted it is a huge game in the context of the season with the Warriors eight points behind with Swansea-based.

“They’re one place ahead of us in fourth position and we’ve got those [two] games in hand over them, so it’s a massive game for us this week against them,” Murray added.

“If we beat them we could potentially either go level with them or, if we get a good win, we could go one point ahead of them with the games in hand.

“We’ve put ourselves in a really good position, we’re aware we’ve got five home games left and Treviso and Munster away – if we can get a win this weekend it puts us in a really strong position to not only compete to be in the top four, but to try to push ourselves up the positions to target that home draw if we can.

“It’s one of these eight-pointers. If we fall eight points behind them, it’s then having to chase them really hard which means your two games in hand—the Edinburgh and Treviso games—you’re having to work really hard to get bonus points, so it’s a massive game this week. That’s why the Scarlets was such an important win to give ourselves a good platform.”

The Ospreys saw their season stutter with a glut of star players away with Wales during the Six Nations and suffered defeat on their last visit to Scotland at the hands of Edinburgh at Meggetland.

But after an impressive win over Cardiff Blues in the South Wales derby last week Murray is aware of how dangerous the four-time Celtic League winners can be when they come to play, and the expectation is of a fast, open game.

“The games they’ve played recently, I thought they played some really good, expansive rugby,” he continued. “Their forwards and their backs work really well together, a lot of really good inter-play.

“Their forwards look really comfortable on the ball, so we know we’ve got a big defensive job to do on them this week, but also we need to get our attack right and try to cause more problems against them than we have done in some of our previous games.

“We’ve watched the Ospreys a lot and done a lot of analysis on them. We watched them in their last game against Cardiff where they got the bonus point, which is quite frustrating for us because we were always hoping that Cardiff would hold them to less than four tries, but they’re a quality side so we know what we need to do against them.

“They’ll bring a few more players back in this week rested from the Six Nations and guys like Alun Wyn Jones I thought in Wales’ last game even though he didn’t play particularly well he still stood out for me – he’s a quality player. They’re very, very good, very talented.”