RaboDirect Pro12: Munster head coach Rob Penney urges his side to think of their international ambitions ahead of Leinster clash 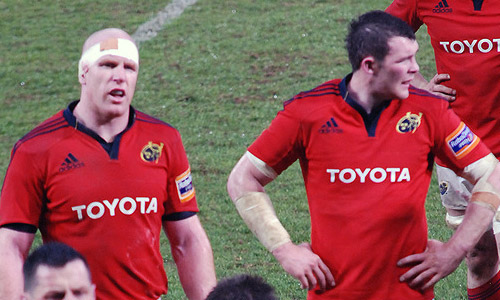 Rob Penney has warned his Munster players not to think of their international ambitions ahead of Saturday’s sell-out derby against rivals Leinster at the Aviva Stadium.

Ireland’s top two rugby provinces do battle in a potential winner takes all showdown in the Pro12 with top spot up for grabs and the Munster head coach is wary that personal ambition to play for Ireland could take over in a passionate encounter.

“Fixtures like this come around with a massive amount of emotional attachment and the last thing you want is to be overcooked,” Penney said.

“The sideshow of the players who want to play their way into [Ireland head coach] Joe [Schmidt’s] frame is a dangerous one because it takes guys onto an individual pathway that’s not conducive to having a positive outcome for the team.

“At the end of that, hopefully they can look back with a lot of pride on a really good evening’s performance and hopefully good enough to get the points. If it’s not, at least they’ve done the right thing by the group and by the jersey.”

Munster were 19-15 victors when the two sides met at Thomond Park in Limerick at the start of October.

But a surprise defeat at the Scarlets earlier this month allowed Leinster to retake top spot as Matt O’Connor’s side stretched their unbeaten run to nine matches despite many of their star players away on international duty as Ireland won their first Six Nations title since 2009.

With the Irish sides comfortably ahead of the chasing pack, the derby match could go some way to determining the end of season semi-finals with four rounds remaining after this weekend.

But New Zealander Penney, who is set to leave Munster at the end of the current campaign, insists his side will enter the hotly-anticipated contest in the right spirit.

“We’re treating this game with the respect it deserves,” Penny added. “It’s a local derby, it’s a massive contest for both sides and there’s an immense amount of tradition within the game.

“The passion and parochialism around Irish rugby for these two provinces is without peer around the world, I would suggest.”

Dublin-based Leinster may have enjoyed the lion’s share of silverware in recent years, but Munster find themselves in the quarter-finals of the last Heineken Cup against four-time winners Toulouse next week as well as favourites for home draws in the Pro12 semi-finals.

But for Penney, the focus is squarely on winning Saturday’s match.

“Leinster are a great side, they’re full of internationals and that’s the reality of it,” Penney continued.

“The Heineken Cup is important but so are local derbies. And this local derby has been added another dimension because of the position in the table of the two sides and because of the success of Leinster in recent years and I’d like to think that Munster have clawed back a little bit.

“We’ve got a long way to go and we still want to be as respected as Leinster are and as good as they are and to do that we have to put in the performance on the field.”