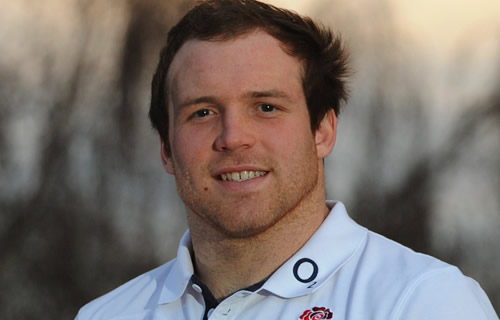 He’s filling in for the injured Dan Cole during this year’s Six Nations but England’s new kid on the block Henry Thomas insists he’s a different proposition altogether from the Leicester prop.

The 22-year-old tighthead is the new kid on the England scrummaging block, having made his international debut against Argentina last summer, before getting his first taste of Six Nations action off the replacement’s bench against Scotland at Murrayfield in February.

An injury to first Bath’s David Wilson for the trips to Paris and Edinburgh and now Leicester’s Cole against Ireland; has seen the former Millfield School pupil promoted to the senior ranks and Thomas is determined to impress England forward’s Coach Graham Rowntree for the remainder of the Championship.

A new generation of front row players have emerged under England boss Stuart Lancaster – Harlequin Joe Marler, London Wasp Matt Mullan and Saracen Mako Vunipola – but Thomas is not worried about the competition.

A summer switch to Bath Rugby beckons this summer but it’s his own performances for club and country that are presently occupying Thomas’ thoughts.

Scrummaging is one of my big work-on areas; I feel that is going in the right direction

“You have got to be your own player; each player has their own selling point, their point of difference,” said Thomas.

“For me that is ball in hand stuff, carrying and link-play, that is one of my main strengths I feel.

“Scrummaging is one of my big work-on areas; I feel that is going in the right direction.

“Everyone in the squad has their work-on areas and you want to be more rounded, at the breakdown and the like. But you have to focus on your strengths and what has got you here.

“Coley (Dan Cole) is a big character in the squad. He may not be the one shouting his mouth off but quietly he is a very funny bloke.
“He has a lot of influence in the whole team atmosphere; he’s a very dry amusing bloke.

“The amount of caps he has got and playing for the Lions, that’s a massive goal of mine. He is the level to try and aim for but I’m my own player.”

To sparkle at international level; just ask Wales’ experienced front row duo of Gethin Jenkins and Adam Jones, being dominant at scrum-time is a prerequisite for any new kid on the block.

Performing in the set-piece in the Premiership week-in-week-out is a very different beast to locking horns at international level and that’s why Thomas has been putting the hard yards in on the training field in recent weeks.

“The basic for any front-row forward is the scrum; you cannot play at international level without that being at a very high standard,” said Thomas, who was speaking on behalf of Marriott Hotels, who are an official partner of England Rugby.

“Being 22, that’s what I have been working on as well as the physical side of it, but the scrummaging has been a big area for work and that has been going well.

“The scrums are closer together at international level; there is even less of a hit which makes the technical side of things even more important.
“I think that is starting to suit me now, the more I work with the guys here.

“You don’t get that a lot in the Premiership, the referees like to keep it a bit further apart and keep the hit.

“But internationals now you are almost pre-engaged, so you have to work out ways to deal with that and use it to your advantage.

“I can definitely see the progression being made. Working with guys like Dan Cole and Wig (Rowntree) these guys have got heaps of experience.
“Those guys are fantastic scrummagers and it helps you along so I definitely feel like I have improved.

“It is definitely a step up in intensity, Argentina was special because it’s my first caps and you can never take that away.

“But first Six Nations cap is pretty big, when I came on against Ireland was amazing and I feel like I made a bit of a difference.

“That makes me feel more part of the squad and gives me confidence going through into later games.”

Matt Mullan, Chris Ashton and Henry Thomas are representing the England team on behalf of Marriott Hotels, official partner of England Rugby; see how Marriott is reinventing travel at TravelBrilliantly.co.uk