Six Nations 2014: Matt Mullan is determined to impress and become a regular ahead of next year’s World Cup 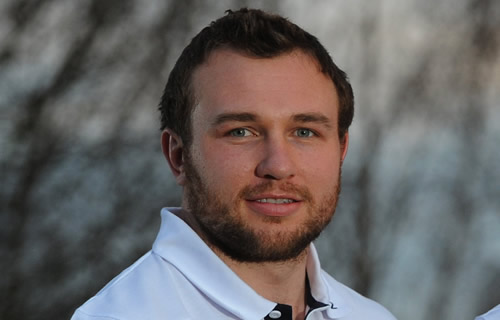 He may be down the pecking order currently for England but London Wasp Matt Mullan is determined to impress Stuart Lancaster and become a regular ahead of next year’s World Cup.

Mullan made his England debut in 2010 but has struggled to establish himself under first Martin Johnson and now Lancaster – the likes of Alex Corbisierio, Mako Vunipola, Joe Marler and Dan Cole are all preferred choices in the front row.

The 27-year-old has been an ever-present in the England Six Nations squad this season but once again he has been overlooked for the visit of Wales to Twickenham this weekend.

Mullan was retained alongside Leicester’s Manu Tuilagi to help provide squad-competition at England’s Pennyhill Park training base this week but its competitive action he now craves.

The former Worcester prop, who spent eight years at Sixways, insists his switch to South West London and the opportunity to team up with London Wasps director of rugby Dai Young – a former Lions prop himself – has reinvented his career and massively enhanced his England chances.

I like to hang my hat on my scrummaging ability, that’s my core skill and I think it’s crucial

“Being at Wasps has really helped me; I had only ever known Worcester before then,” added Mullan.

“But I have improved with my consistency and it has all started to come together. Dai (Young) has been a huge help in that sense.

“People may think that they know what is going on in the front row but you are no expert unless you have played there.

“And Dai has, he is a great mind to have around, someone to learn from and try and improve.

“He’s not just the scrum coach but the head coach so the scrum inevitably comes up a lot and it is something that he prides himself on.

“I like to hang my hat on my scrummaging ability, that’s my core skill and I think it’s crucial.

“Everyone is still trying to work out the scrum laws a bit, I feel I am learning all the time but I do think they have helped me.

“It has been great to be involved for the whole of the Six Nations; I have never had a full tournament to be able to get involved with the squad.

“You can definitely feel that it has upped in terms of intensity, you have to work hard and there is so much to learn from these guys, being here can only help.”

Harlequin Marler and Northampton Saint Corbisierio may be the men in possession of the England loosehead jersey at present but Mullan insists he’s gunning for the shirt.

“Joe is the man in possession of the shirt at the moment and rightly so,” he added. “But I’m not content with being second best and I will keep working hard to earn that jersey.

“What he has done has been fantastic, since really that game against New Zealand in the autumn he has been the starter and he deserves it.

“He’s a real talent and is fast becoming a world class loosehead and it’s great to be able to watch and train with him to try to make myself a better player.

“There is such competition at loosehead, but that’s a good thing really. As sportsmen of course you are always looking to improve but even more so when you have the strength in depth that England has.

“I’m not sure why that is but it’s very strong at the moment and those guys are playing well.

I just have to wait for a bad game from one of them or an injury which is a bit strange.

But really all I want is a chance to shine, a couple of stand-out moments in a game to show the guys what I can offer.

It’s not just in the loose, you can’t work on one to the detriment of the other, and you have to be the full package.”

Matt Mullan, Chris Ashton and Henry Thomas are representing the England team on behalf of Marriott Hotels, official partner of England Rugby; see how Marriott is reinventing travel at TravelBrilliantly.co.uk