Tokyo 7s: England remain unbeaten from their three pool matches to set up a quarter-final against Canada 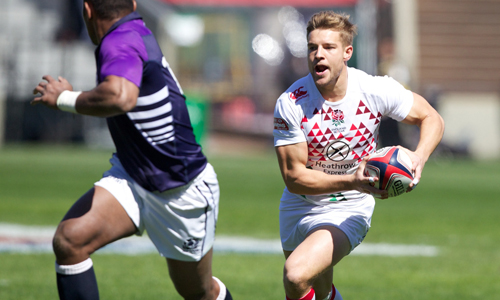 England finished day one of the Tokyo 7s unbeaten from their three pool matches to earn a Cup quarter-final against Canada on Sunday.

Their opening two matches were comfortable affairs as Simon Amor’s side whitewashed Scotland and Spain 36-0 and 29-0 before their crunch final match with Australia to determine their fate for day two.

Top points scorer and England captain Tom Mitchell scored a hat-trick against the Spanish, but England had to come from 14-0 and 21-7 down to record an impressive 24-21 win against Australia as Phil Burgess scored a brace of tries to cancel out Greg Jeloudev’s fifth and sixth tries of the day.

“We are really pleased, especially with four new boys in the side,” said Amor. “We are trying to work on our defence and our identity.”

Despite their defeat, Australia still qualified for the quarter-finals but face World Series leaders New Zealand, who won the last series in Wellington.

The All Blacks came through Pool A with comfortable wins over Wales and Portugal as captain Tim Mikkelson ran in five tries including a hat-trick against Wales, before leaving it late to secure a narrow 22-17 win over Canada as Bryce Heem ran in after the buzzer sounded.

South Africa and Fiji also qualified for the quarter-finals unbeaten from Pools B and C and will face the US and Kenya respectively.

The Blitzbokke had a relatively comfortable first day with wins over hosts Japan, Kenya and Argentina, but their coach wasn’t entirely happy with the performance shown by the defending Tokyo champions.

“We gave a lot of penalties away in the first-half of our first match but we maintained our discipline,” said Blitzbokke coach Neil Powell. “It wasn’t a perfect start but we will have to do a lot better to defend our title.”

The other home nations failed to make the top two in their groups as they won just two matches between them so drop into the Bowl/Shield competition on Sunday with Wales facing Spain and Scotland up against Portugal, but the winners face tough opposition with Samoa, France and Argentina also in the hunt along with hosts Japan.

Should England get past Canada they will face the winner of South Africa vs United States in the Cup semi-final.