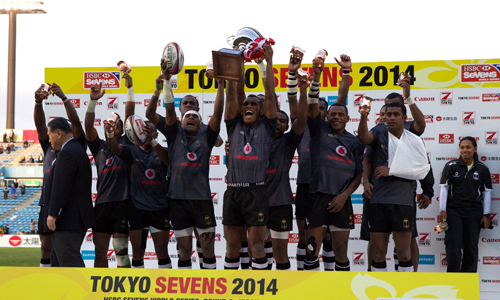 Fiji defeated defending champions South Africa 33-26 in a pulsating nine-try thriller in the final of the Tokyo Sevens on Sunday.

Fiji raced away to a 12-0 lead in the opening stages through Emosi Mulevoro and the round’s top try-scorer Samisoni Viriviri, before the Blitzbokke struck back through captain Kyle Brown, Stephan Dippenaar and Justin Geduld.

Benito Masilevu scored Fiji’s third to take the score to 19-19 at the break at half-time.

Fiji restored their lead with a fantastic 80-metre runaway try by veteran Setefano Cakau. South Africa hit back through Geduld, who went under the posts before Waisea Nacuqu sealed a famous win in the last minute.

“It is good to get on the podium again and the boys played really well today,” said Fiji coach Ben Ryan. “When they want to turn it on they are not an impossible team to stop but they are pretty hard to beat.

“We’re working hard, it’s not been plain sailing but you can see what happens when you get the boys together.

“They started really well and we went to sleep, but we woke up and it was a great game. To finish above South Africa is a great way to end the two days.

“We will keep working hard and if we can knock over more trophies then it will give us inertia for next year. I’m really proud.”

In the earlier matches, England, who had defeated Canada in their Cup quarter-final, bounced back from a semi-final whitewash at the hands of the Blitzbokke to finish third with a 21-12 win over reigning World Series champions New Zealand.

Wales defeated Spain and Japan to reach the Bowl final against Scotland who came through against Portugal and France. Scarlets centre Iolo Evans ran in for a hat-trick of tries as Wales came from 14-0 and 21-7 down to win 28-21.

“It is a step forward,” said Wales coach Gareth Williams. “We were disappointed yesterday and that draw with Canada cost us a quarter-final place.

“We had some tough games today, a lot of it our own fault, but the boys dug in well and that final was an example of that to be fair to them.”

After Japan had capped off their weekend as hosts to defeat Samoa 42-12 in the Bowl semi-final, the Pacific Islanders were whitewashed by Argentina 26-0 as Martin Rodriguez scored nine points to pick up the Shield.

Greg Jeloudev picked up his eighth try of the weekend as Australia beat the USA 17-12 to win a second successive Plate.

New Zealand’s worst finish in the current series saw them drop to second in the World Series standings behind the Blitzbokke who go top despite defeat in the Cup final. Fiji consolidated their third place ahead of England in fourth.