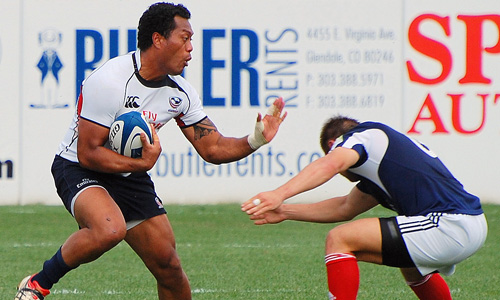 USA became the latest nation to qualify for next year’s Rugby World Cup with a 32-13 win over Uruguay.

The South Americans had threatened to spoil the party as they took a 13-3 half-time lead in Atalanta.

I’m really proud of the guys

But the USA hit back with 29 unanswered points with tries from Eric Fry, Mike Petri and the Suniula brothers in the second half to go through as the Americas 2 qualifiers with a 59-40 aggregate scoreline.

The USA will now go into Pool B in England as to face South Africa, Samoa, Scotland and the Asia 1 qualifiers.

“I’m really proud of the guys,” said captain Todd Clever. “We had some bad bounces in the first game and it took longer than expected to get on top.

“But in the second half the leaders of the group led by example and we got front-foot ball.”

Uruguay took the lead on 23 minutes centre Joaquin Prada found his way through, but the USA finally found their way into the match despite the TMO twice ruling out tries.

Early indiscipline cost the USA as they were guilty of a number of handling errors which saw them give up good territory and their plight went from bad to worse as they got on the wrong side of English referee Greg Garner.

Andrew Suniula was the first American sent to the sin-bin after taking a blow to the head, his punch aimed at Uruguay’s Francisco Bulanti not pleasing Garner.

The veteran centre was joined on the sidelines by replacement prop Nick Wallace, who was the guilty party after several scrum offences.

With less than 15 minutes to go two tries in quick succession from the Suniula brothers, Andrew and Shalom, turned the tide in the Eagles’ favour after a disastrous first half performance had threatened to send them into the inter-continental repechage instead of straight to England as Pool B qualifiers alongside South Africa, Samoa, Scotland and the Asia 1 qualifier.

Mike Tolkin’s side scored 29 unanswered points after the break to wipe out a 13-3 half-time deficit, prop Eric Fry starting the recovery when he touched down the first of his side’s four tries shortly after the re-start.

With Uruguay captain Arturo Avalo in the bin for an illegal tackle, the USA finally got a foothold in the match as Fry squeezed his way over the line eight minutes after the restart with Wyles adding the conversion.

Uruguay held on until the hour mark before the Eagles ran in three tries in nine minutes, spearheaded by scrum-half Mike Petri who blazed in from 30 metres out from a quick tap penalty as the Uruguay defence was caught cold. Wyles was again successful with the conversion to give the USA a 17-13 lead.

Shalom Suniula got in on the action soon after, stepping off his left foot to cut inside before his brother Andrew collected an offload from wing Luke Hume to race to the line.

Wyles missed the second conversion, but as the USA dominated territory and possession in the final 10 minutes, he added a late penalty to seal an impressive comeback while Uruguay’s hopes of making the World Cup will need a win through the repêchage against an Asian side.