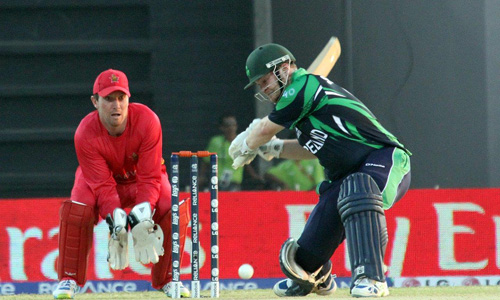 Stephan Myburgh revealed Netherlands’ game plan was to “swing as hard as you can” after a stunning six-wicket victory over Ireland in World Twenty20.

William Porterfield’s side appeared to be in a strong position after Andrew Poynter and Kevin O’Brien’s 101-run partnership helped Ireland set a target of 190.

With qualification for the Super 10 up for grabs, Ireland appeared to be in pole position with victory good enough to seal their passage at the expense of the Dutch and Zimbabwe in Group B.

However, the Netherlands smashed a staggering 19 sixes to eclipse Ireland’s total in a brisk 13.5 overs to seal their place in the next round and eliminate Porterfield’s men.

“Hopefully it looked calm but it wasn’t calm [for us],” said Myburgh.

“We were always positive and we never going to just go for the win. We wanted to qualify.”

Asked about the Dutch’s tactics, he added: “Today was keep your head still and swing hard as you can.

“We knew the first six overs would be really important and just take on the powerplay.”

Myburh heaped praise on his captain Peter Borren, who hit 31 runs from 15 balls before being caught by Andrew Dockerell off the bowling of O’Brien.

“It was really good to bat with skipper. Especially against spinners, he takes them and it makes a real difference.”