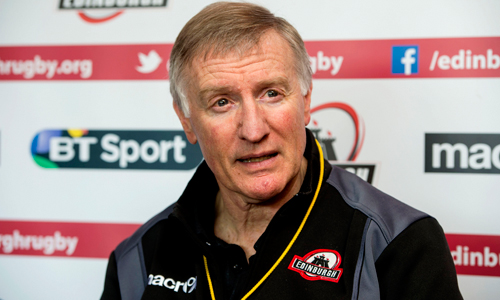 Edinburgh Rugby have confirmed that head coach Alan Solomons has been named as Nick Mallett’s assistant for a World XV clash against South Africa in June.

The South African duo, who led the Springboks during their 17-match unbeaten run between August 1997 and December 1998 which included a Tri Nations win and several record wins, will join forces again for the non-Test match at Newlands.

Solomons was named as assistant a week ago as Mallett confirmed his involvement and intentions for the match
“Nick and I coached the Springboks for a number of years so I’m looking forward to meeting up with him again and coaching what looks set to be a very talented team,” Solomons told Edinburghrugby.org.

“Naturally I have a very important job to focus on with Edinburgh Rugby but this is certainly something to look forward to in the summer break.

“It’ll be special to play against South Africa back at Newlands at the beginning of their Rugby Championship and World Cup preparations.”

It will be the first international of 2014 for South Africa, who also face two summer Tests against Wales and one against Scotland in June before the Rugby Championship begins in August.

Mallett, who has also coached the Barbarians to a 2010 victory over the Springboks, will bring a Baa-Baas feel to the match, but insists the intensity will be different that involving the Barbarians.

“The Barbarians game is played on a neutral field against a team from the Southern Hemisphere, which is not at full strength, at the end of the season,” Mallett said. “This game is a much tougher proposition.

“If the guys think they are coming for a party, then they’ll get a massive hiding. However, they’re guys who have had great international careers and they’ll want to do their best against the second best team in the world.”

RaboDirect Pro12: ‘Glasgow need to be at their best against Ulster’