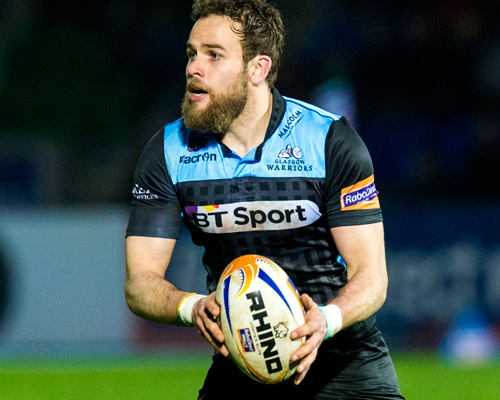 Ruaridh Jackson is set to join Wasps from Glasgow in the summer Photo: Glasgow Warriors

London Wasps have confirmed that Glasgow Warriors out-half Ruaridh Jackson will join the Aviva Premiership side in the summer.

Jackson, 26, who failed to win a new contract with the RaboDirect Pro12 club, is the latest player to have agreed a switch to Adams Park after the High Wycombe-based club announced the signing of Italian prop Lorenzo Cittadini on Tuesday.

“I am very excited about joining Wasps,” said Jackson. “I have been at Glasgow a long time now but I am now relishing this new challenge that lies ahead.

“After meeting with Dai [Young] I was very impressed with what the club has to offer and it is easy to see the club is going in the right direction.

“I can’t wait to start the next stage of my rugby career and to be involved with this great club.”

Jackson has slipped down the pecking order for the No10 jersey after six seasons at Scotstoun with international rival Duncan Weir—who agreed a new deal with the club this season—as their first choice.

Meanwhile, former Ayr outside-half Finn Russell has emerged as a solid back-up for Gregor Townsend’s side, kicking 21 of 24 penalties this season to become the league’s leading marksman.

“Ruaridh has been a fantastic ambassador for the club during his six years in Glasgow and been a key driver of the club’s improvement in recent seasons,” said Townsend

“He became a centurion earlier this season, which shows how big a role he’s played.

“I’ve really enjoyed working with Ruaridh and I’m confident that he will be successful in the next stage of his rugby career.

“We wish him all the best when he moves on at the end of the season.”

The 23-capped international will expect to face challenge current Wasps number 10 Andy Goode, who at 34, is coming to the end of his career, while versatile former Worcester Warriors back Joe Carlisle can also play outside-half.

“I have been very impressed with what I have seen of Ruaridh and I am looking forward to welcoming him to the club,” said Wasps director of rugby Dai Young.

“He will add to the quality pool of 10s we already have and the competition for that position next season will be very strong.”

Mark Cavendish hits the gym with yellow jersey on his mind