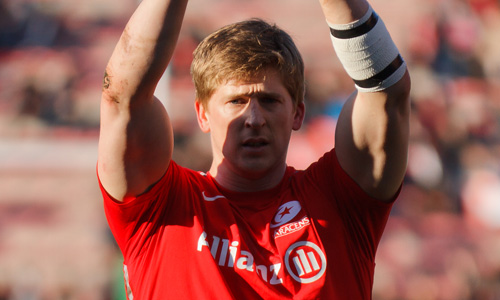 Sarries shine in the sun

A top-of-the-table clash doesn’t always live up to its billing, but Saracens vs Northampton Saints usually produces something special with so much international talent on show. A sun-kissed Allianz Park with its artificial pitch certainly helped the occasion for the hosts as they stormed into a 28-10 lead with tries from David Strettle—who rejoined Leicester’s Niki Goneva at the top of the try-scoring charts with 10 this season—as well as a first half finish from Scotland captain Kelly Brown who went over after a sweeping team move. Argentina international Marcelo Bosch also got in on the try-scoring act in the second half, but it was his first-half kicking which raised eyebrows as he nonchalantly thumped over a 56-metre effort with plenty to spare before slotting another closer to the posts. Much may have been made at the weekend about Sarries posting another financial loss last season and while there are questions about how they run the club, there is no doubt that Saracens are a formidable force on the field when they get their team game going.

Jim Mallinder’s side may have reached the final of the LV=Cup and be in the semi-finals of the Amlin Challenge Cup later this month, but the east midlands side have struggled since the Six Nations championship earlier this year and have now slipped to a third successive Premiership defeat on top of their LV=Cup defeat to Exeter Chiefs. The 28-24 defeat earned them a bonus point in north London, but the scoreboard certainly flattered Northampton who only found their feet as a glut of replacements and the Sarries loss of tighthead prop Matt Stevens to the sin-bin in the final 10 minutes derailed the Saracens machine. Mallinder accepted his side had been second best and late tries from England centre Luther Burrell and Wales winger George North were merely consolation. Such as been Saints’ decline in recent weeks they have dropped from league leaders to just hanging on to second place with Leicester Tigers creeping up on them after the reigning champions picked up another bonus point win at the weekend. Saints aren’t short on talented individuals, but currently lack leadership without hooker Dylan Hartley which was further highlighted at the end of the match with a lineout five metres from the Sarries tryline going to the front leading to a penalty. With Stevens off the field and Saints driving maul having already yielded a penalty try, it was another damning indictment on poor decision-making at crucial times which could come back to cost them.

With a Heineken Cup semi-final to come against Clermont Auvergne in two weeks, the loss of influential outside-half Owen Farrell at the break with a foot injury was the only major concern for Mark McCall with Saracens already guaranteed a Premiership semi-final place and now just one point away from earning a home match at Allianz Park for the end of season showpiece. The England international was noticeably in pain after taking a number of big hits in the opening quarter of the first half and his kicking foot was the problem as he kicked a penalty late in the half. Farrell has unquestionably been one of the stand-out English players for club and country this season, but with Bosch having already shown his power and accuracy from the tee, and experience in Charlie Hodgson on the bench, questions may be asked about why Farrell was goal kicking when his services in that area weren’t required despite the calibre of the opposition. Sarries may have breathing room ahead of their final three rounds of the Premiership, but will miss Farrell’s creativity against Clermont at Twickenham if he is unable to recover in time.