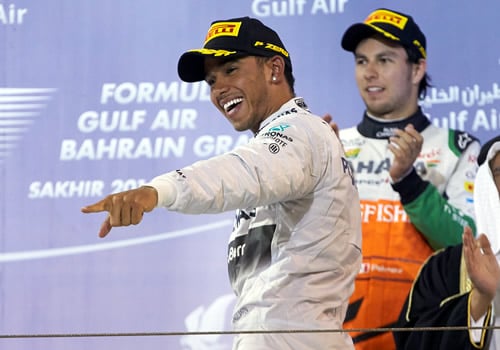 Mercedes ensured it was a spectacle

It was a spectacular event on Bahrain’s 10th anniversary as an F1 venue – and on the occasion of the first night race in the Gulf state. Mercedes allowed their drivers, Lewis Hamilton and Nico Rosberg, to race one another, which proved thrilling as the battle for first place went down to the wire. The pair pushed each other to the limit in what was a thrilling spectacle with intelligent manoeuvres and slick over takes but remained “sensible” and “respectful” as Hamilton said, ensuring no contact was made. The race in the Gulf was thrilling and entertaining and it should lay to bed any criticisms that there is no racing in the new F1.

In a race in which Mercedes-powered cars dominated, team leaders and drivers alike have called for a rules change to placate angry fans. All Mercedes’ customer teams all have the same advantage as the main Mercedes outfit. However, because McLaren, Williams and Force India only took delivery of their power units relatively recently, they have had less time to work the layout into their respective car designs. The genius behind the Mercedes engine is also the best explanation yet for why the W05 has so far proved unbeatable in 2014. It was no surprise then that before the Bahrain race Ferrari president Luca Di Montezemolo had criticised the new efficiency-based F1 for being like “taxi driving”. Ferrari and Red Bull, who have both been off the race pace so far this season, led the charge against the sport’s new fuel limits as well as the muted sound of the new 1.6 litre V6 turbo hybrid engines which also has received much criticism.

Pastor Maldonado has once again found himself as the villain. The Venezuelan, who has a history of being reckless, has been given a five-place grid penalty for the next race in China for causing the crash which sent Sauber’s Esteban Gutierrez into a spectacular roll. The Lotus driver has also been given three penalty points on his super-licence. Maldonado isn’t new to being labelled irresponsible, as back in 2012, the then Williams driver was penalised for collision that took Lewis Hamilton out of the European Grand Prix. The Venezuelan was given a 20-second penalty, which dropped him from 10th to 12th place and out of the points. Also in the same year, Sauber driver Sergio Perez had called for stewards to come down heavily on Pastor Maldonado after they collided at the British Grand Prix. The Mexican went on to accuse the Venezuelan driver of lacking respect for his peers and labelled him a “stupid and dangerous driver.” In 2013 Adrian Sutil said he wouldn’t speak with Pastor Maldonado about their US Grand Prix collision as the German said the Williams driver is “on a different planet.” At the Italian Grand Prix, in the same year, Maldonado lost 10 places on the grid after he was handed two five-placed penalties following the Belgian Grand Prix. These were for jumping the start and causing a collision with Timo Glock at the restart, which led to Maldonado’s retirement.

Sahara Force India’s returned to the podium as Mexican driver, Sergio Perez, scored a brilliant third place at the Bahrain Grand Prix. Nico Hulkenberg also had a positive race, with the German coming close behind in fifth, bringing the team’s points total to 44 and moving them up to second place in the constructors’ championship. Will Force India, who finished in a respectable sixth place in the constructors’ championship last year, actually contend with the big boys? With the results so far, you definitely cannot not ignore their challenge. They have increased their points total in every race from 9 in Australia to 10 in Malaysia to 25 in Bahrain. It’s still very early in the season but if they carry on picking up strong points, they could see themselves competing for the title.