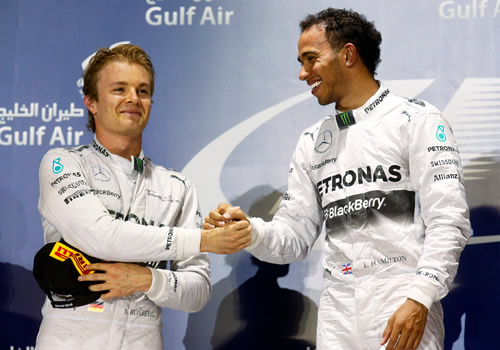 Nico Rosberg and Lewis Hamilton on the podium Photo: Mercedes

Lewis Hamilton could not hide his delight after narrowly beating his Mercedes team-mate Nico Rosberg to victory at the Bahrain Grand Prix.

Hamilton crossed the line one second ahead of Rosberg after an intriguing battle between the pair, as the Briton cut the German’s lead at the top of the drivers’ standings to 11 points.

“I haven’t had a race like that since 2007,” said a beaming Hamilton. “It was really exciting, Nico drove fantastically well, it was so fair but it was so hard to keep him behind me.

“I was on a real knife edge at the end but just managed to take it.”

Rosberg, meanwhile, described the race as the most entertaining of his career despite the disappointment of finishing second.

“I strongly dislike finishing second to Lewis but on the other hand it was the most exciting race I have ever had in my whole career,” said Rosberg.

“Today was a day for the sport. I hope you all had a lot of fun.

“The team played it as fair as they possibly could today. Let us race flat out. I don’t think you need any more evidence that we are here to race and there are no team orders.”