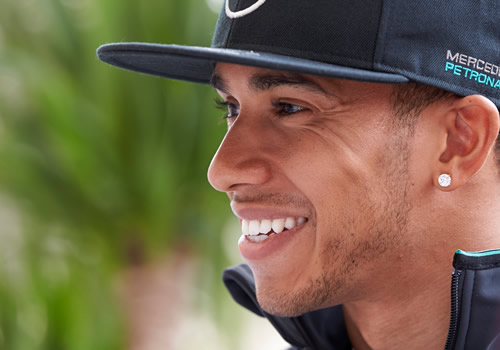 Mercedes driver Lewis Hamilton is determined to pick up where he left off in Malaysia and claim his first win at the Bahrain Grand Prix this weekend.

The 29-year-old led from pole to flag as he notched up his first race victory of the season at Sepang, finishing ahead of team-mate Nico Rosberg.

“It was great to kick-start my season with a win in Malaysia,” said Hamilton. “Taking a one-two was also a fantastic result for the team and I can’t wait to see what we can do in Bahrain.

“I’ve finished on the podium here a couple of times here but, for one reason or another, I’ve never managed to get the win. Until last week it was the same story for me with Malaysia, so fingers crossed this can be the year of breaking those cycles!”

The Brit knows it won’t be an easy race weekend but is hopeful for another positive result for him and his team.

“The Bahrain circuit is a real challenge: particularly for the tyres in terms of overheating. Quite often you get sand blowing onto the track, which is one of the unique features of this circuit and throws another challenge into the mix.

“A dusty track will have less grip than a clean one, so you have to prepare for that to change even between qualifying sessions,” he continued.

“Malaysia was a really busy event for the team and we have a test coming up straight after this weekend’s race, so it would be great to give the crew another good result to head home with after a long road trip.”

“We know it’s going to be tough to maintain our current form, particularly at a circuit where every team has had so much running time over the winter, but I’ll be pushing hard to keep those results coming.”

Rosberg also wants the positive momentum to continue especially in Bahrain, where he feels best prepared.

The German said: “The first two races have been a great start to my season and I’m already looking forward to being back in the car and carrying on that momentum in Bahrain. It’s a great track and I really enjoy driving it.

“I’ve never had much luck on race weekends here, but it’s definitely the one I’m best prepared for this year. I came to Bahrain for the Pirelli tyre test back in December and during winter testing a few weeks ago. Of course, it’s the same situation for most teams and drivers so we could see some close battles throughout the weekend.”

“We may be leading both championships at the moment but our rivals are breathing down our necks, so we need to stay focused and keep doing our job calmly and professionally.”