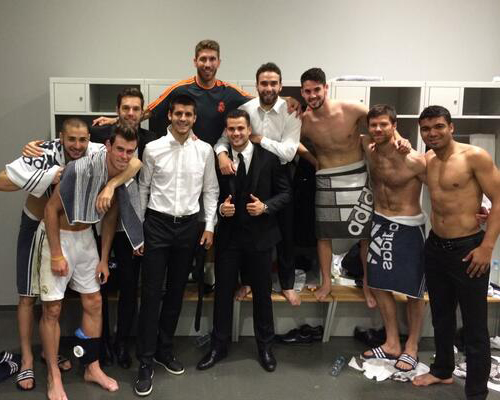 Real Madrid remain on course to win their 10th European Cup after Sergio Ramos and Cristiano Ronaldo fired the Spanish side to a 4-0 victory at Bayern Munich.

Ramos netted a brace of headers to put the visitors in charge before Ronaldo added a third before half-time, with the Portuguese winger scoring a late free-kick to seal a 5-0 aggregate win against the holders.

Madrid’s landslide victory prompted a flurry of tweets from former Real stars and other professionals, and here is a selection of the best in chronological order.

Ajax forward Ryan Babel (‏@Ryanbabel) tips Madrid to win the crown: “I think Real is ready to win the @ChampionsLeague this year…”

Manchester United legend Gary Neville ‏(@GNev2) is all about cycles: “Has Pep ruined German football! That will be the next one.. Cycles!!”

Former Barcelona striker Gary Lineker (‏@GaryLineker) is suggesting that it will be Chelsea in the final alongside Madrid: “We could well have a Champions League final between 2 clubs whose managers have both been sacked by Chelsea.”

Ex-Madrid defender Fabio Cannavaro ‏(@fabiocannavaro) is thrilled for his old club: “Congratulations to @MrAncelotti and to all @realmadrid players #HalaMadrid”